Chenoa is a city in McLean County, Illinois, United States. The population was 1,785 at the 2010 census. Located at the intersections of Interstate 55, Historic Route 66, and U.S. Route 24. Founded in 1854 by Mathew T. Scott, Chenoa was created to provide a retail and trade center for his farm tenants as well as a grain shipping facility. The Chenoa Centennial was celebrated in 1954. The town is situated in a highly productive agricultural area. Two currently active businesses here are notable due to their longevity. They are Schuirman's Drug Store (now Chenoa Pharmacy) and Union Roofing. The latter company today is one of the largest roofing contractors in Illinois. Several small manufacturers operate here and a number of antique dealers are Chenoa-based. The town school system closed at the end of the 2004 school year, consolidating with the nearby Prairie Central school district. A well attended July 4 celebration is held in Chenoa each year.

Situated in McLean County, the area surrounding Chenoa boasts some of the richest soil in the world. Only patches of farmland in Argentina, southern Ukraine and along the Yellow River in China match the fertile ground that covers much of the northern half of Illinois, particularly a high-yielding band through the state's midsection. McLean County is traditionally the state's leading corn and soybean producer.

There were 713 households out of which 34.2% had children under the age of 18 living with them, 62.8% were married couples living together, 7.6% had a female householder with no husband present, and 26.4% were non-families. 23.0% of all households were made up of individuals and 12.2% had someone living alone who was 65 years of age or older. The average household size was 2.59 and the average family size was 3.03. 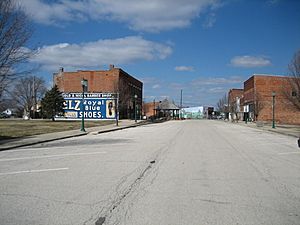 The Town of Chenoa was laid out on 13 May 1856 by Matthew T. Scott. At this time the Chicago and Alton Railroad, had been running trains for almost two years, but the survey for the east-west Toledo, Peoria and Oquawka (soon to be the Toledo, Peoria and Western) had not reached McLean County. Scott anticipated the place where the railroads would cross and platted the town which he called Chenoa. Matthew T. Scott (24 February 1828 - 21 May 1891) was the son of a Kentucky banker and by the time he reached Illinois, was an experienced land developer who led a group of well financed investors. The European settlement history of Chenoa began in 1854 when Matthew T. Scott began buying thousands of acres of land in this area.

There has been much discussion about the meaning of the name Chenoa. Mid-nineteenth century histories explain that it was an Indian word for "Kentucky" and could therefore be rendered as "Dark and Bloody Ground." Callary makes it clear that this is incorrect and that this meaning is unknown in Kentucky. Others explain that Chenoa is a Cherokee word meaning "Dove" or "White Dove." Again this is not the case. Dove in Cherokee is "waya" and white dove "unega waya." There is also the often-repeated story that Scott had originally wanted the name to read "Chenowa" but the railroad had mistakenly dropped the letter "w." This again is not true. The railroad had no say in the naming of Chenoa; the spelling "Chenoa" is exactly how Scott recorded the name when he first laid out the town. However,"Chenoka" or "Chenoa" is one of many Native American names for the Kentucky River and this may explain how Scott got the idea that the word could be translated as Kentucky.

The plan of Chenoa is complex because it is the blending of two rival townsites. Scott's original town, which lies west of the railroad, was built around a central park, is much more like the plan like central Illinois towns of the 1830s than that of other towns laid out in the 1850s. However, Scott only owned the in Section 2, while his rival, and former business companion, William Marshall had managed to purchase Section 1. Marshall's land included most of the land east of the railroad; on this land, he laid out a competing town, East Chenoa. Scott did control a small strip between the two towns which he refused to plat out into streets and lots, so anyone who tried to pass the short distance from one town to the other would be guilty of trespass. Scott would call this strip his "imaginary wall," although it was never a physical barrier. The duel nature of the platting also explains why Chenoa had two distinct streets named Lincoln. Both Scott's and Marshall's towns were orthogonal grids with north-south and east-west streets, but plan became still more complex when a later addition by Scott included Veto Street, which ran parallel to the railroad and at an odd angle to the earlier streets.

The first advertisement for the town of Chenoa appeared under the bold heading, GREAT SALE OF LOTS IN THE TOWN OF CHENOA, MAY 15 1856. The advertisement makes clear the advantages Scott had in mind when he selected the location of the town. It was, he wrote, "The only crossing of railroads likely to be made within McLean County within four or five years, and persons can easily ascertain that the connection of the two roads will be effected by the first of November or December." He went on to explain that, while there was no large body of timber nearby, coal will be furnished at twelve cents a bushell and cheep lumber, poplar, walnut, and oak will also be brought in by the railroad. This was a particular advantage because "... persons will come from eight or ten miles for these articles, bringing along their grain, making loads with both ways - carrying back coal, sometimes for themselves, again for their neighbors." If anyone would build a house worth $400 to $500 within six months of buying a lot, they could have two years of credit on the sale prioce interest free. Scott was willing to take a quarter interest in a steam saw mill and would donate sites for churches, schools and burial grounds. Moreover, anyone who sold liquor in the town would forfeit the title to their property.

The great problem with the development of Chenoa was that, before the town was laid out, there had been no settlement in the surrounding country. The land around Chenoa was prairie wilderness. The Indians who had hunted and lived in Illinois country for many years had been moved by the U. S. Government to regions west of the Mississippi river by the time Chenoa was founded. Soon the tough prairie sod was broken by the plow which made acres and acres of land available for farming. Scott aided the development of nearby land by plowing and cultivating 16,000 acres (65 km2), building two hundred houses, and planting twenty-seven miles of hedge fences. The first structures within the limits of the new town were two little half-sod and half-board dugouts which served as depot, freight house, and shelter for railroad section hands; this is one of the very few mentions of sod houses in McLean County. J. B. Lenney came from Pennsylvania to the new town of Chenoa and in 1855 put up the frame building here which was called "The Farmer's Store." J. B. Lenney took an active part in the development of the town and is referred to as the "Father of Chenoa." In 1856 the National Hotel was constructed. All of these buildings were on the east side of the tracks. In 1864 Chenoa, East Chenoa, and several additions were united under one town government which was confirmed by a special act of the Illinois General Assembly in 1869.

Slowly, additional improvements were made. Rectangular blocks of stone were placed at road intersections. Changes in livestock laws made it possible for residents to tear down the wooden fences that had once surrounded every residence. Many trees were planted. The Chicago and Alton was double tracked in 1890. In 1891 the first electric lights were installed. A union station was built so both railroads could share passenger facilities; unfortunately it burned down during Armistice celebrations on 11 November 1918. This was not the towns only serious July 1894 the entire business district town east of the Railroad burned down; very few of the buildings were insured. Railroad traffic peaked in 1911, when twenty-four trains arrived. After that automobile and truck traffic slowly replaced trains and Chenoa became a stop of the fabled Route 66. 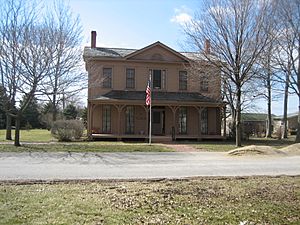 Matthew T. Scott House. The house was built as a home for Matthew T. Scott (see above), who promoted and developed much of the surrounding area. It is closely associated with many events in the history of Chenoa. What appears today to be one building, is in fact, a blending of two structures. The oldest part is, at the rear of the house, was built in 1855, as a post and beam I-cottage. The more formal front of the house was added in 1863 and is a true balloon frame structure built around a central hall with an impressive staircase. The foundation of both is of Joliet dolomite. In addition to Matthew T. Scott, the home was the scene of many family events. It was here that the first Adlai E. Stevenson I (1835–1914), who held many important government positions and would become the 23rd Vice President of the United States from 1893 to 1897, courted Scott's sister-in-law, Letitia Green; their wedding took place in this house in 1866. By 1980 the house was in poor condition and seemed likely to be demolished. It was then bought and restored by Mrs. Elizabeth Stevenson Ives, a great niece of Matthew T. Scott. In 1982 it was placed on the National Register of Historical Places. 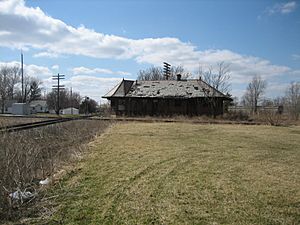 A crumbling rail station in Chenoa *Depot has since been torn down, apparently during fall 2009

All content from Kiddle encyclopedia articles (including the article images and facts) can be freely used under Attribution-ShareAlike license, unless stated otherwise. Cite this article:
Chenoa, Illinois Facts for Kids. Kiddle Encyclopedia.