Heyworth is a village in McLean County, Illinois, United States. It was founded in 1858. As of 2010, Heyworth has a population of 2,841. It is part of the Bloomington–Normal Metropolitan Statistical Area.

Heyworth was laid out by Campbell Wakefield on September 11, 1858. Before settlement, the locality now known as Heyworth was covered by a heavy growth of timber and underbrush which was inhabited by the Kickapoo Native Americans, and was supported a great number of deer, wild turkeys, and packs of large gray wolves.

As settlers began to move West, families such as the Rutledges, Funks, Passwaters, Bishops, Nobles,Wakefields, and Martins settled in the immediate vicinity of the present Village of Heyworth as early as 1824. Campbell Wakefield was the primary founder of Heyworth. In the course of his achievements, Wakefield became the owner of a vast tract of land including what is now Heyworth. He continually added to his original tract until he obtained about 1,500 acres (6.1 km2) in one plot.

As the Western US population increased and industries began to spring up, railroads were becoming a great advantage. In 1852 and 1853, the Illinois Central Railroad was constructed through the Wakefield land. When the line became operational in 1855, the residents hoped to put a train station in the vicinity. Many property owners vied for the station, but Wakefield immediately donated a large tract of land for the station. Additionally he set aside adjacent land for the foundation of a town, a Presbyterian Church, and a district school.

The first post office was built in the municipality in 1856, when the new station was opened. The station was named "Elmwood", but it was soon discovered that this name was already taken by a locality in Peoria County. The President of the Illinois Central Railroad proposed calling the new station "Heyworth," after Lawrence Heyworth, an English director of the railroad.

After the establishment of the station, Campbell Wakefield made several donations to encourage trade and induce business men to locate in the new town. He became the proprietor of the new town, and the Village of Heyworth was incorporated on March 31, 1869. 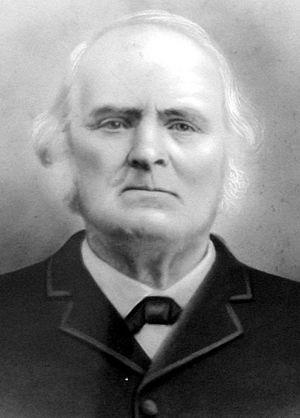 One of the largest draws to McLean County and the Heyworth area is that it offers easy access to more than 30 million people who live within 300 miles (480 km). Chicago, St. Louis and Indianapolis are each just over two hours away by car and twelve major metro areas are located within a 450-mile (720 km) radius. The Central Illinois Regional Airport is just 12 miles (19 km) away, with commercial airlines and jet service.

Community services include excellent local police protection, a volunteer fire department, local 24-hour ambulance service which will soon have paid paramedics on staff, local schools from kindergarten through grade 12, and several churches of various denominations. The annual Hey Days celebration in May features a carnival, food and live entertainment. Christmas is celebrated with the "Holidays Heyworth Style" parade and craft show.

OSF Primary Care, a medical clinic operated by the OSF Healthcare System under the auspices of OSF St. Joseph's Medical Center in Bloomington, opened in January 2010. The facility provides in-town healthcare access to Heyworth residents for the first time since 1989. Also, a Casey's General Store. 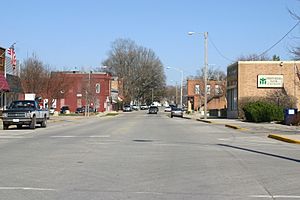 There were 898 households out of which 42.8% had children under the age of 18 living with them, 65.0% were married couples living together, 8.2% had a female householder with no husband present, and 23.4% were non-families. 19.3% of all households were made up of individuals and 9.9% had someone living alone who was 65 years of age or older. The average household size was 2.71 and the average family size was 3.12.

All content from Kiddle encyclopedia articles (including the article images and facts) can be freely used under Attribution-ShareAlike license, unless stated otherwise. Cite this article:
Heyworth, Illinois Facts for Kids. Kiddle Encyclopedia.