Towanda is a village in McLean County, Illinois, United States. The population was 480 at the 2010 census. It is part of the Bloomington–Normal Metropolitan Statistical Area.

Towanda, Illinois, was named for Towanda in Bradford County, Pennsylvania. The land on which Towanda stands was first entered by Charles Badeau who had graduated from Wesleyan University, Middletown, Connecticut, in 1840, and was employed as the assistant to the chief engineer of what was then the Alton and Springfield Railroad. Because in Illinois at that time it was illegal for railroads or their officials to establish new towns, much of the land was then transferred to two McLean County real estate developers Jesse W. Fell (November 10, 1808 – February 22, 1887) and Charles W. Holder (September 29, 1819 - April 30, 1900). These two men laid out the town of Towanda and filed the plat on December 7, 1854. Jesse W. Fell, a native of Chester County in southeastern Pennsylvania, was a widely known land dealer in Central Illinois who played major role in founding many Illinois towns including Clinton, Dwight, Normal, Pontiac, and who was the driving force behind the establishment of the school that would become Illinois State University Holder was linked with Fell in many of his town founding schemes including Normal and Larchwood in Lyon County, Iowa; the McLean County town of Holder is named in his honor. Fell association with the railroad goes back to the time when it was surveyed. On at least two occasions he was able to alter the path of the railroad to suit his own interests: organizing a bend in the road so it would pass through his town of Normal and making a slight change in the survey so it would pass through the Livingston County town of Pontiac, where he had interests rather than the rival town of Richmond. Shortly after Towanda was laid out most of the land was back in the hands of the railroad's land agent English-born Charles Roadnight (1814-?). Roadnight built the first warehouse in Towanda; he settled in Bloomington, had a farm in Dwight, and in 1858 later became treasurer of what was then the Chicago and Alton Railroad.

Central Illinois towns of the 1830s, such as Bloomington, Lexington, Leroy and Pontiac, were usually built around a central square. In contrast, most towns of the 1850s, like Towanda, were oriented toward the railroad tracks. In the case of Towanda a diagonal main street was established parallel to the railroad, with the main building lots on only one side; the effect was to have the commercial establishments look across the street toward the tracks. This was a common design in newly established towns along the Chicago and Alton Railroad and may be found, with slight variations, in places like Dwight, Gardner, Odell and Mclean; Fell's town of Normal, established at the same time as Towanda, was to have had exactly the same arrangement; except that in Normal, the original street paralleling the railroad, quickly lost its importance to the reverse side of the block. This standard town plan often left town designers with odd triangular pieces of land, where the diagonal street met with other streets which were aligned north-south or east-west. These triangles are often still in public hands. In the case of Towanda, Fell gave each of two triangular areas, one on either side of the tracks, to the town. On the Original deed they were given the name "plaza" and both have always served the city as parks.

Alex Warren built the first residence in the new town and James Alexander the first warehouse. These were soon followed by Wesley Bishop's grocery and Frank Henderson's dry goods store. The largest building was a two-story structure built by Charles Roadnight, which was fifty by one hundred feet; the first floor was used for stores and the second as a meeting toom. It burned about 1900. In 1873-1874, wooden sidewalks were being built, followed by brick sidewalks in 1891, and concrete walkways in 1916. The town was officially incorporated in 1870. The first jail was built in the North Park and replaced at least once; the structure can not have been very substantial because in 1901 the town fathers were forced to appoint a committee to inquire into what had happened to the jail. Perhaps the most exciting event in the town's history was the attack on the Buena Vista Tavern. A group of local women took exception to the amount of money their menfolk were spending on whiskey. The assmebled at the hardware store where they were issued hatchets. They then marched into the Buena Vista smashing bottles, threatening the barman, and hurling whatever they could find through the tavern windows. Each of the women was fined one dollar.

A series of photographs taken in the 1870s give a striking view of early Towanda town. They show a town criss crossed with fences and looking rather like the set for a western movie. Cattle and hogs were diriven into town at night and penned before shipping on the railroad. Houses are carefully fenced to protect gardens from stray livestock. The majority of the homes are wooden I-cottages; single story, or story-and-a-half, wood frame dwelings with a symmetrical facede. There are some modest two story structures. Along the railroad long rail corn crib may be seen. The simple board and battan railroad station is clearly visible Perhaps the most striking structure is a stone tank house topped with a windmill.

Towanda has been plagued with fires. In 1905, a large part of the downtown area burned, and in 1917 the original railroad station went up in flames. However, there was also progress. In 1901, telephone service began, and in 1937 Main Street was paved. Still, Towanda remained in the shadow of its larger neighbors to the south, Normal and Bloomington, and was always smaller than Lexington, the next town north on the stagecoach road and the Chicago and Alton Railroad line, which generally paralleled each other between Chicago and Springfield.

Trains were essential to the development of the town, but traffic was never heavy; in 1887, only one southbound and one northbound freight stopped at Towanda. Passenger service stopped altogether in the 1940s. Most travel had long since been replaced by automobile and truck traffic along the roads that paralleled the Chicago and Alton rail line: State Bond Route 4 during the 1910s, U.S. Route 66 from 1926 through the early 1970s, and Interstate 55 from the 1970s onward. In 1955, U.S. Route 66 was locally widened to four lanes, as a partially divided highway with a grass median between the northbound and southbound lanes along much of its stretch. The former southbound lanes of Route 66 are now long disused, whereas the northbound roadbed is still in use as a two-lane local highway and the current path of Historic U.S. Route 66 in Illinois, now known as the Illinois Route 66 Scenic Byway, a designated National Scenic Byway.

When in 1977 the construction of Interstate 55 detoured U.S. Route 66 in a gradual curve around the northwest side of Towanda, a 3-1/4 mile section of southbound Route 66 was closed off to motorized traffic and abandoned. Between 1998 and 2000, a not-for-profit student and community project created the Towanda Historic Route 66 Parkway, also known as the Historic Route 66 Trail (as seen on Google Maps), on a 2.5-mile stretch of the old disused Route 66 roadway between the south end of Towanda and a point about 3 miles northeast, where Interstate 55 swings east to meet up with and once again closely parallel Historic Route 66. The parkway, an ongoing project that preserved the Money Creek Bridge north of town on Route 66 and begins about 750 feet northeast of the bridge, also includes an outdoor educational exhibit on the history of Route 66 called “Historic Route 66: A Geographic Journey” that details the path of Route 66 through all eight states.[1] This exhibit extends from the intersection of Historic Route 66 and Jefferson Street near the I-55 interchange to a point at the southern tip of town just past an unnamed pond off of Historic Route 66 (at 40.557656, -88.908876), where there is a rest stop and parking area for catfish and bass fishing in the pond. The stretch of the parkway where the exhibit was erected is a subset of the overall Towanda trail, which includes a three-flagpole garden on the NE corner of Jefferson and Route 66, several picnic areas along the length of the trail, scattered birdhouses and intermittent landscaped areas extending from the Money Creek Bridge to the south end of the pond. The trail and parkway exhibit, now a popular local tourist stop on Historic Route 66, continue to be improved on an irregular basis, and the progress of improvements is detailed on the project website.[2]

In 2006, the Towanda Area Historical Society partnered with the Towanda District Library to obtain a digital imaging grant from the Illinois State Library for a project entitled “Capturing Towanda’s Past for Eternity.” An exceptional collection of scanned documents and images were added to the project's website as a result [3].

On average, there are 190 sunny days per year in Towanda. The July high is around 87 degrees. The January low is 16. Towanda-area historical tornado activity is slightly above Illinois state average. It is 114% greater than the overall U.S. average.

Each July 3, Towanda has a spaghetti supper in the evening and a street dance at night. People from Towanda and surrounding areas come out for the festivities.

On July 4, a parade goes through Towanda and is considered a big event in McLean County. Individuals and families from around Bloomington, Normal, Hudson, Lexington and elsewhere come out for it. Additionally, there is a flea market and the two parks where vendors come from all around the United States to sell their antiques and other items. 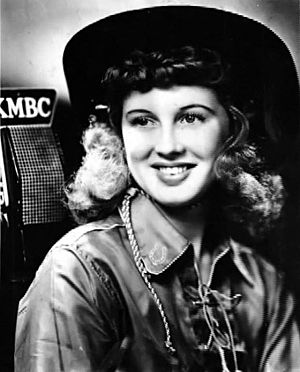 The most famous person from Towanda was singer-musician-TV personality Bonnie Lou (born Mary Joan Kath), who gained international popularity in the 1950s with rock and roll and country hits. She became a popular TV host and performer in Cincinnati until her retirement in the 1970s.

All content from Kiddle encyclopedia articles (including the article images and facts) can be freely used under Attribution-ShareAlike license, unless stated otherwise. Cite this article:
Towanda, Illinois Facts for Kids. Kiddle Encyclopedia.