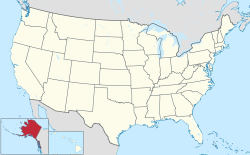 Map of the United States with Alaska highlighted.

Alaska is a state of the United States situated in the northwest extremity of the North American continent. According to the 2010 United States Census, Alaska is the 4th least populous state with 710,231 inhabitants but is the largest by land area spanning 570,640.95 square miles (1,477,953.3 km2). As of October 2014[update], Alaska has 148 incorporated cities: four unified home rule municipalities, which are considered both boroughs and cities, ten home rule cities, nineteen first class cities and 115 second class cities. As reflected in the 2010 Census, Alaska's incorporated cities cover only 2.1% of the territory's land mass but are home to 69.92% of its population. The majority of the incorporated land mass consists of the four unified municipalities, each over 1,700 square miles (4,400 km2) in size. Only two other cities have an incorporated area exceeding 100 square miles (260 km2): Unalaska, which includes the fishing port of Dutch Harbor, and Valdez, which includes the terminus of the Trans-Alaska Pipeline System.

Incorporated cities in Alaska are categorized as either "general law" (subdivided into "first class" and "second class") or "home rule". Home rule cities occur when a community establishes a commission to draft a charter, which is then ratified by voters at an election. Home rule cities have all legislative powers not prohibited by law or charter. The powers and functions of general law cities are defined by Alaska state laws. Title 29 of the Alaska Statutes, which covers municipal government, requires that a community must have at least 400 permanent residents to incorporate as a home rule or first class city. This status does not diminish if a city's population declines; one home rule city (Nenana) and four first class cities (Hydaburg, Pelican, Seldovia and Tanana) reported populations falling below that threshold in the 2010 Census.

All content from Kiddle encyclopedia articles (including the article images and facts) can be freely used under Attribution-ShareAlike license, unless stated otherwise. Cite this article:
List of cities in Alaska Facts for Kids. Kiddle Encyclopedia.