Gustavus (Lingít: Wanachích T’aak Héen) (gus-TAY-vəs) is a second-class city in Hoonah-Angoon Census Area in the U.S. state of Alaska. The 2020 census population was 655, which represents a 48% increase over the 2010 census of 442 and is one of the fastest growing communities in Alaska.

Map of Gustavus outside of the town's gas station.

Gustavus, formerly known as Strawberry Point, lies on the outwash plain created by the glaciers that once filled Glacier Bay. Two hundred years ago, it was primarily a single large "beach". The native Tlingit and others used the area for fishing, berry picking, and other similar uses. The town itself is less than one hundred years old. The first settlers arrived in 1914, but left shortly afterward. The first permanent homestead was established in 1917, when Abraham Lincoln Parker moved his family to Strawberry Point. Many Gustavus residents are descendants and relatives of the original Parker homesteaders.

In 1925 the name became Gustavus, when the U.S. Post Office required a change for its new post office, although locals continued calling it Strawberry Point long afterwards. The new name came from "Point Gustavus" at the mouth of Glacier Bay.

In 1793 George Vancouver named Point Adolphus (today a well-known humpback whale feeding area) after Adolphus Frederick, seventh son of King George III. In 1878, W.H. Dall, while working on a coastal survey, saw "Adolphus" on the map and assumed it was for Swedish king Gustavus Adolphus. The point across Icy Straits from Point Adolphus at the mouth of Glacier Bay was not named on the map, so Dall called it "Gustavus". Another possibility is that Dall named Gustavus for Gustavus C. Hanus, a Naval Academy graduate who had extensive experience throughout southeast Alaska, and both Dall and Hanus served with the Coast Survey in Alaska. Hanus laid out the first streets in Juneau and helped quell the trouble in Klukwan in 1881.

There is still a large beach at Gustavus, with many strawberries. It is surrounded on three sides by Glacier Bay National Park and Preserve, and on the fourth side by water. The area is a temperate rain forest; spruce and hemlock trees reach heights of 60 metres (200 ft), and alders, balsam poplar, fern, mosses, fireweed, lupine, and other plants are also common. Gustavus's coastal location gives it a relatively mild winter. Summer temperatures range from 11 to 17 °C (52 to 63 °F); winter temperatures from −3 to 4 °C (27 to 39 °F).

According to the United States Census Bureau, the city has a total area of 38 square miles (98 km2), all of it land.

Gustavus is split by the Salmon River, across which there is a bridge for the paved road running out to Glacier Bay National Park. Coho salmon, Dolly Varden, and other fish are commonly caught in this river. Within the city limits, the river is affected by tides.

Gustavus first appeared on the 1940 U.S. Census as "Strawberry Point", an unincorporated village. In 1950, it returned as Gustavus. It was made a census-designated place (CDP) in 1980. Its status was changed to an incorporated city in 2004. 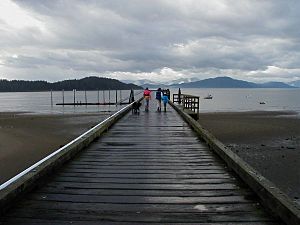 The original Gustavus dock, which has since been replaced.

Of the 199 households, 28% had children under the age of 18 living with them, 47% were married couples living together, 6% had a female householder with no husband present, and 43% were non-families. 38% of all households were made up of individuals, and 6% had someone living alone who was 65 years of age or older. The average household size was 2.2 and the average family size was 2.9.

Gustavus is not connected to the contiguous highway system. Gustavus Airport and the Alaska Marine Highway provide access between Gustavus and the outside world. During the 2020 coronavirus pandemic, the ferry system shut down and Gustavus became even more isolated, relying on private boats for grocery shipments.

The Gustavus economy is strongly linked to the surrounding natural resources; tourism and commercial fishing are mainstays. However, the importance of commercial fishing is in decline, as the Dungeness crab fishery in Glacier Bay National Park was closed in the early 2000s and the fishing for Dungeness outside of the national park has become poor. Salmon and halibut remain as the primary catch of the commercial fishing done out of Gustavus. Those not involved in tourism or seafood typically work for the government at the public school, the post office, the National Park Service, or the City of Gustavus.

All content from Kiddle encyclopedia articles (including the article images and facts) can be freely used under Attribution-ShareAlike license, unless stated otherwise. Cite this article:
Gustavus, Alaska Facts for Kids. Kiddle Encyclopedia.