Brevig Mission (Inupiaq: Sitaisaq or Sinauraq; Russian: Бревиг-Мишен) is a city in Nome Census Area, Alaska. The population was 388 at the 2010 census, up from 276 in 2000. It is named for the Norwegian Lutheran pastor Tollef L. Brevig, who served at the mission that would later bear his name. First settled in 1900, the mission became known as Teller Mission before receiving its current name. The mostly Inupiat Eskimo population continues to practice subsistence. Brevig Mission is a dry village, which means the sale or possession of alcohol is illegal. 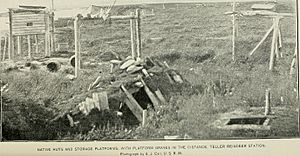 Brevig Mission first appeared on the 1950 U.S. Census and in 1960 as the unincorporated village of "Teller Mission." In 1969, it was formally incorporated under its present name of Brevig Mission.

Of the 68 households, 52.9% had children under the age of 18 living with them, 30.9% were married couples living together, 25.0% had a female householder with no husband present, and 20.6% were non-families. 14.7% of all households were made up of individuals, and none had someone living alone who was 65 years of age or older. The average household size was 4.06 and the average family size was 4.35.

In the late 1990s, a team of scientists led by Johan Hultin exhumed the body of an Inuit woman who had been buried in the permafrost in a gravesite near Brevig Mission in an attempt to recover RNA of the 1918 influenza virus (Spanish flu) that killed her. The pandemic caused by the 1918 influenza outbreak was by far the most devastating single disease outbreak in modern history, killing 50 to 100 million people during an 18-month period. In Brevig Mission alone, it killed 72 out of 80 residents in a 5-day period.

All content from Kiddle encyclopedia articles (including the article images and facts) can be freely used under Attribution-ShareAlike license, unless stated otherwise. Cite this article:
Brevig Mission, Alaska Facts for Kids. Kiddle Encyclopedia.