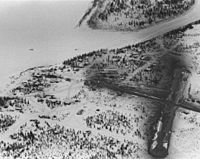 Ambler (Ivisaappaat[pronunciation?] in Iñupiaq) is a city in Northwest Arctic Borough, Alaska, United States. At the 2010 census the population was 258. The city is located in the large Iñupiaq language speaking region of Alaska, and the local dialect is known as the Ambler dialect (related to the Shugnak dialect). As of 1999[update], over 91% of the community speaks and understands the language (Kraus, 1999), with many young children actively learning the language in school. It has important relationships with the "hub" city of Kotzebue, Alaska and has important relationships with Maniilaq Health Association.

Ambler is located in the continental climate zone. Temperatures range from 90F to -70F. The Kobuk River is navigable from early June to mid-October. Ambler has a subarctic climate with long, extremely cold winters and short, warm summers. Temperatures in the winter often drop below -40 °C/°F, just like most of interior Alaska, but it frequently gets mild spells where the temperatures stay above 10 °F (-12 °C) for several days in a row because of the relative closeness to the Pacific Ocean. It occasionally gets above freezing in winter, even in January, although it is not very common. Places further East like Fairbanks and Fort Yukon, for comparison, are usually lightly affected by the mild Pacific air. Ambler is also wetter because of this. Summers are quite variable too, as the weather alternates between warm days and cooler days. The highest temperature of any given year is about 80 °F (26 °C) and occasionally above 86 °F (30 °C), occurring as recently as June 18 and 19, 2013 with a maximum temperature of 90 °F (32 °C) recorded on both days. Below is a table containing data for the period 1981-1992:

The community was named for a tributary of the Kobuk River, which was named for Dr.James M. Ambler, who died of starvation after his ship was trapped in the Arctic ice in 1881. Ambler was permanently settled in 1958 when people from Shungnak and Kobuk moved downstream because of the variety of fish, wild game and spruce trees in the area. An archaeological site is located nearby at Onion Portage. A post office was established in 1963. The City was incorporated in 1971. The story of the prophet Maniilaq states that he predicted in the future a great whale would swim upriver and arrive at Ambler.

Ambler's major means of transportation are by plane, small boat and snowmachine. There are no roads linking the City to other parts of the state. Ambler Airport, a State-owned 3,000' long by 60' wide lighted gravel airstrip, with a 2,400' long by 60' wide gravel crosswind airstrip, is located one and a half miles from the City. Bering Air, Hageland Aviation, and Ambler Air offer passenger flight service. In addition, daily scheduled services are provided out of Kotzebue, and air taxis provide charter flights. The airstrip has recently undergone major improvements. Boats are used for inter-village travel and subsistence activities. ATVs and snowmachines are commonly used in winter.

There were 79 households out of which 54.4% had children under the age of 18 living with them, 45.6% were married couples living together, 25.3% had a female householder with no husband present, and 19.0% were non-families. 16.5% of all households were made up of individuals and 3.8% had someone living alone who was 65 years of age or older. The average household size was 3.91 and the average family size was 4.33.

All content from Kiddle encyclopedia articles (including the article images and facts) can be freely used under Attribution-ShareAlike license, unless stated otherwise. Cite this article:
Ambler, Alaska Facts for Kids. Kiddle Encyclopedia.