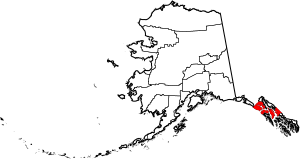 Hoonah-Angoon Census Area is a census area located in the U.S. state of Alaska. As of the 2010 census, the population was 2,150. It is part of the unorganized borough and therefore has no borough seat. Its largest community is the city of Hoonah. 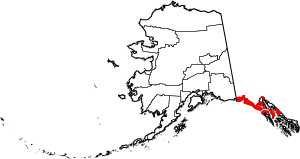 The census area was significantly larger in the 1990 census, at which time it was the Skagway-Yakutat-Angoon Census Area. After Yakutat was incorporated as a unified city-borough on September 22, 1992, it was renamed Skagway-Hoonah-Angoon Census Area; When Skagway followed suit on June 20, 2007, the census area assumed its current name. 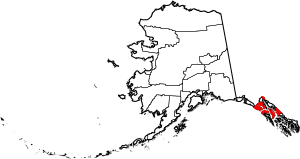 NOTE: Demographic data below is for the former "Skagway-Hoonah-Angoon" Census Area, which still includes Skagway Borough.

All content from Kiddle encyclopedia articles (including the article images and facts) can be freely used under Attribution-ShareAlike license, unless stated otherwise. Cite this article:
Hoonah–Angoon Census Area, Alaska Facts for Kids. Kiddle Encyclopedia.