Hoonah (Tlingit: Xunaa or Gaaw Yat’aḵ Aan) is a largely Tlingit community on Chichagof Island, located in Alaska's panhandle in the southeast region of the state. It is 30 miles (48 km) west of Juneau, across the Alaskan Inside Passage. Hoonah is the only first-class city on Chichagof Island, the 109th-largest island in the world and the 5th-largest island in the U.S.. At the 2010 census the population was 760, down from 860 at the 2000 census. In the summer the population can swell to over 1,300 depending on fishing, boating, hiking and hunting conditions.

"Hoonah" became the official spelling in 1901, with establishment of the Hoonah branch of the United States Post Office. "Hoonah" is the approximate pronunciation of the Tlingit name Xunaa, which means “lee of the north wind”, i.e., protected from the north wind. 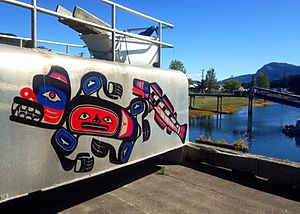 Native art at the dock in Hoonah, Alaska.

The clans comprising the Huna Tlingit originally settled what is now Glacier Bay National Park as well as Icy Strait, Cross Sound, and the outer coast north to Sea Otter Creek. Two catastrophic events forced the Tlingit from their homeland; rapid glacial advance in Glacier Bay and a landslide-induced tsunami in Lituya Bay along the outer coast. Tlingit oral tradition recounts these events as well as the clans' ultimate resettlement in Xunaa.

A partial timeline of modern Hoonah history is below:

The town of Hoonah is featured on the Discovery Channel show Alaskan Bush People. 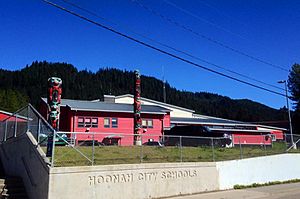 Sheldon Jackson established the first school house & teacher's residence in November 1881. The school was initially overseen by Mr. and Mrs. Walter B. Styles of New York until their transfer to Sitka in 1882. The Reverend and Mrs. John McFarland assumed responsibility for the school in 1884 and by 1885 219 Tlingit students were enrolled, 69, boys, 76 girls and 74 adults. A Territorial school and Government school were built in 1923. In 1932 the Government school was demolished and replaced by a Bureau of Indian Affairs school. 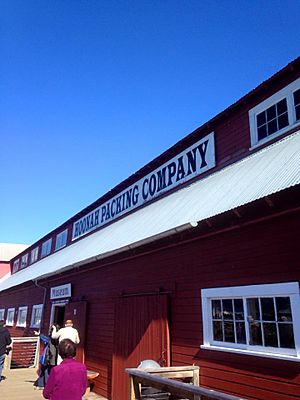 Hoonah Packing Company ("HPC") built in 1912 was one of eight canneries operating in the area during the early twentieth century, representing Hoonah's major industry at the time. HPC was sold several times until coming to be owned by Wards Cove Packing which also owned Hoonah Trading. The Cannery ceased operating in 1954, but continued to see use by commercial fishermen for storing and repairing their boats and gear.

Hoonah is on the north shore of Chichagof Island, on Icy Strait, at 58°6′34″N 135°26′11″W﻿ / ﻿58.10944°N 135.43639°W﻿ / 58.10944; -135.43639 (58.109435, -135.436349). The communities of Whitestone Logging Camp, Alaska, which was being dismantled in early 2011 and Game Creek are also in its urban area. The port at Hoonah is called Port Frederick. Other small communities nearby on Chichagof Island also include Tenake Springs and Pelican. A study began in 2009 regarding the feasibility of a road from Hoonah to Pelican and possibly connecting to Tenake Springs to allow an energy corridor to hot spring thermal energy sources in the region for Hoonah, to lower heating and energy costs. Most Tenake residents expressed opposition to the road, while Pelican has generally supported the idea. The road would save the Alaska Department of Transportation ferry costs in summer snow-free months, by connecting these areas to Hoonah.

Tongass National Forest borders the area and has an unpaved road system of over 300 miles. recreation areas include Game Creek, Kennel Creek, Freshwater Bay which has a small boat harbor, all to the east and Whitestone boat landing and False Bay recreation area to the southeast. These areas are inaccessible in winter due to deep snow.

According to the Köppen climate classification system, Hoonah has an Oceanic climate (Cfb).

Hoonah is the principal village for the Huna Tlingit who originally settled Glacier Bay, Icy Strait, Cross Sound, and the Outer Coast. The four original Tlingit clans present are Chookaneidi, T'aakdeintaan, Wooshkeetaan, and Kaagwaantaan. Numerous other clans migrated to, or married into, the community, as have non-native peoples.

There were 300 households, out of which 33.7% had children under the age of 18 living with them, 52.3% were married couples living together, 12.3% had a female householder with no husband present, and 28.3% were non-families. 22.7% of all households were made up of individuals, and 5.0% had someone living alone who was 65 years of age or older. The average household size was 2.83 and the average family size was 3.34.

The old fish cannery, which ceased operations in the 1950s, located near Icy Strait, was obtained by the Huna Totem Corporation (HTC), the village ANCSA Corporation. The road to the site, Cannery Road, was paved in 2000 and the site was converted into a tourism destination for cruise ship passengers. From May to September, cruise ships anchor off Icy Strait Point, and visits from ship passengers enhance Hoonah's warm-weather economy weekly. The former Hoonah Air Force Station, once a White Alice Communications System facility during the Cold War, which closed in the mid-1970s, is now the start point of a zip-line, one of the longest in the world, which ends at the cannery site. The cruise ship passengers, visiting fishing vessels, and summertime boaters who dock in the Hoonah city small boat harbor, all bring revenue to the city. The closing of the logging industry in southeast Alaska hurt the town economically in the early 1990s, but limited logging, tourism and fishing have helped to replace the void.

Hunters, hikers, campers, boaters and fishers all visit Hoonah as tourists throughout the year. The mild weather, much like that of Seattle, attracts tourists to the city.

Hoonah, being an island community, is only accessible by boat or plane. The Alaska Marine Highway serves Hoonah with the M/V LeConte and the M/V Taku which offers residents a slower but more dependable and cheaper option to travel to and from Hoonah to Juneau.

The city of Hoonah operates a small boat harbor, a large vessel mooring harbor and a new boat haulout facility. The AK Dept. of Transportation built a new ferry facility that opened in early 2001 in Hoonah.

The Hoonah Airport was expanded in 2011. Hoonah Airport has a 3000-ft runway. The airport is planned for expansion to better allow military C-130's from the Coast Guard and Air national Guard land in Hoonah.

The airport offers service via bush carriers Wings of Alaska, Alaska Seaplanes and Air Excursions which offer up to five flights a day between Hoonah and Juneau and to other local communities. Connections can often be made in Juneau with either Alaska Airlines for regional or interstate travel or other bush carriers to go to other villages or communities.

The city is an Alaskan first class city and provides all municipal services including police, utilities and road maintenance. The city also maintains a city park, built in 2010 near the harbor, and a youth activity center.

The police department has a five-bed jail and employs four paid police officers, along with volunteer reserve officers. The Hoonah volunteer Emergency Medical Service (EMS) was recognized by the state of Alaska in 2009 for excellence, and the Hoonah Volunteer Fire Department was accredited by the Alaska Fire Commission in 2010. The Alaska State Troopers have an office post in Hoonah, with one "brown shirt" wildlife enforcement trooper-pilot posted there.

The Alaska Courts maintain a court house in Hoonah for district court, presided over by a magistrate.

The Hoonah Indian Association maintains a tribal office, a senior citizens center and other services to local tribal members.

All content from Kiddle encyclopedia articles (including the article images and facts) can be freely used under Attribution-ShareAlike license, unless stated otherwise. Cite this article:
Hoonah, Alaska Facts for Kids. Kiddle Encyclopedia.