The City and Borough of Yakutat ( YACK-ə-TAT) (Tlingit: Yaakwdáat) is a borough in the U.S. state of Alaska. Incorporated as a non-unified Home Rule Borough on September 22, 1992, Yakutat was previously a city in the Skagway-Yakutat-Angoon Census Area (afterwards renamed the Skagway-Hoonah-Angoon Census Area). The name is Tlingit, Yaakwdáat ("the place where canoes rest") but it originally derives from an Eyak name diyaʼqudaʼt and was influenced by the Tlingit word yaakw ("canoe, boat").

The borough covers an area about six times the size of the U.S. state of Rhode Island, making it one of the largest “counties” in the United States. As of the 2010 census, the population was 662.

The U.S. Census Bureau has defined the former City of Yakutat as a census-designated place within the borough. The only other significant population center in the borough is the community of Icy Bay, the site of the Icy Bay Airport, in the west-central part of the borough.

The original settlers in the Yakutat area are believed to have been Eyak-speaking people from the Copper River area. Tlingits migrated into the area and assimilated the Eyaks before the arrival of Europeans in Alaska. Yakutat was only one of a number of Tlingit and mixed Tlingit-Eyak settlements in the region, although all the others have been depopulated or abandoned.

In the eighteenth and nineteenth centuries, English, French, Spanish and Russian explorers came to the region. The Shelikhov-Golikov company, precursor of the Russian-American Company, built a fort in Yakutat in 1795 to facilitate trade in sea otter pelts. It was known as New Russia, Yakutat Colony, or Slavorossiya. When the Russians cut off access to the fisheries nearby, a Tlingit war party attacked and destroyed the fort.

By 1886, after the Alaska Purchase by the United States, the black sand beaches in the area were being mined for gold. In 1889 the Swedish Free Mission Church opened a school and sawmill in the area. A cannery, another sawmill, a store and a railroad were constructed from 1903 by the Stimson Lumber Company. Many people moved to the current site of Yakutat to be closer to the Stimson cannery, which operated through 1970. During World War II, the USAAF stationed a large aviation garrison near Yakutat and built a paved runway. The troops were withdrawn after the war but the runway is still in use as Yakutat Airport, which offers scheduled airline service.

Fishing is currently the largest economic activity in Yakutat.

Yakutat Tlingit Tribe (YTT) received a Language Preservation Grant from the Administration for Native Americans in 2004. With this, they have reinvigorated their efforts to teach the Tlingit language to middle-aged and young people. YTT received another ANA grant in 2007 and is expanding its role in the schools. All the YTT Tlingit language revitalization work focuses on using communicative approaches to second language teaching, such as TPR and ASLA.

While working at a local cannery from 1912 to 1941, Seiki Kayamori extensively photographed Yakutat and its area. A large set of prints of his work is held by Yakutat City Hall. 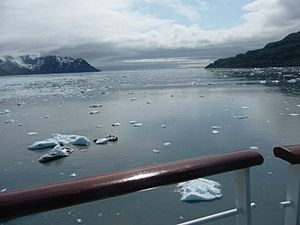 One unique feature in the Borough is Hubbard Glacier, North America's largest tide-water glacier. In 1986 and 2002, the glacier blocked the entrance to Russell Fiord. The resulting Russell Lake rose 83 and 61 feet, until the glacial dam failed. If Russell Lake rises to 135 feet, the water will spill over a pass and flow into the Situk River. This will have a major impact on a world class fishery. Yakutat will not be impacted unless the glacier advances to the townsite, which could take a thousand years. The vegetation in the area indicates that water was flowing over the pass until about 1860.

Yakutat has a climate located on the boundary of the subarctic (Dfc) and subpolar oceanic (Cfc) regimes. Yakutat has the typical high precipitation, absence of frozen soil and temperate rainforest vegetation of the subpolar oceanic climate zone of the Pacific Coast. It rivals Ketchikan as the wettest “city” in the United States, with an annual precipitation (1981−2010 normals) of 155 inches (3.94 m), which falls on 240 days of the year, including 150 inches (381 cm) of snow, almost all of it falling from November through April, that occurs on 64 days annually. (However, with an annual precipitation of 197.8 inches (5.02 m), the city of Whittier receives significantly more annual precipitation than both Yakutat and Ketchikan, which makes it the wettest city in Alaska and the United States, and Yakutat and Ketchikan the second and third wettest cities in Alaska respectively.) September and October represent, on average, the year's primary "rainy season," with an average of over 20 inches of precipitation both months. On average, the year's driest period is late April through July, though no month qualifies as a true "dry season." The monthly daily average temperature ranges from 28.1 °F (−2.2 °C) in January to 54.4 °F (12.4 °C) in July. Extreme temperatures have ranged from −24 °F (−31 °C) on December 30, 1964 up to 88 °F (31 °C) on August 15, 2004, though there are typically 4.9 days of sub-0 °F (−18 °C) lows and only 4 days of 70 °F (21 °C)+ highs annually. Unlike in South Central Alaska, a day with a subzero (°F) high has never been recorded.

There were 265 households out of which 32.8% had children under the age of 18 living with them, 38.5% were married couples living together, 12.1% had a female householder with no husband present, and 40.0% were non-families. 32.1% of all households were made up of individuals and 4.9% had someone living alone who was 65 years of age or older. The average household size was 2.59 and the average family size was 3.30.

At the 2000 census, central Yakutat was treated as a census-designated place (CDP), even though census-designated places "are not legally incorporated under the laws of the state in which they are located." This area, consisting of about 100 square miles (slightly more than 250 km²), contained the vast majority of the population of the entire city-borough.

There were 261 households out of which 33.3% had children under the age of 18 living with them, 38.7% were married couples living together, 12.3% had a female householder with no husband present, and 39.5% were non-families. 31.4% of all households were made up of individuals and 5.0% had someone living alone who was 65 years of age or older. The average household size was 2.61 and the average family size was 3.30.

All content from Kiddle encyclopedia articles (including the article images and facts) can be freely used under Attribution-ShareAlike license, unless stated otherwise. Cite this article:
Yakutat, Alaska Facts for Kids. Kiddle Encyclopedia.