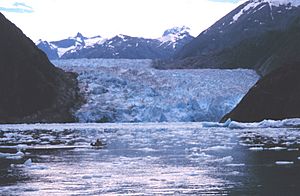 Whaler from NOAA Ship John N. Cobb with Sawyer Glacier in the background.

Tracy Arm is a fjord in Alaska near Juneau (outlet at 57° 46' 40" N 133° 37' 0" W). It is named after the Secretary of the Navy Benjamin Franklin Tracy. It is located about 45 miles (72 km) south of Juneau and 70 miles (110 km) north of Petersburg, Alaska, off of Holkham Bay and adjacent to Stephens Passage within the Tongass National Forest. Tracy Arm is the heart of the Tracy Arm-Fords Terror Wilderness, designated by the United States Congress in 1990

Tracy Arm-Fords Terror Wilderness contains 653,179 acres (2,643.32 km2) and consists of two deep and narrow fjords: Tracy Arm and Endicott Arm. Both fjords are over 30 miles (48 km) long and one-fifth of their area is covered in ice. During the summer, the fjords have considerable floating ice ranging from hand-sized to pieces as large as a three-story building. During the most recent glaciated period, both fjords were filled with active glaciers.

The most common access is by boat using Stephens Passage and entering Holkham Bay and Tracy and Endicott Arms. Float planes from Juneau and Petersburg are also used as a means of access. Large tour vessels and smaller commercial cruise boats frequently use Tracy Arm as a tour destination or as a stop along their normal tour routes.

The twin Sawyer Glaciers, North Sawyer and South Sawyer, are located at the end of Tracy Arm. The wildlife in the area includes black and brown bears, deer, wolves, harbor seals, and a variety of birds, such as Arctic terns and pigeon guillemots. The mountain goats, which are usually found in the higher elevation areas, have been seen near the base of Sawyer Glacier. 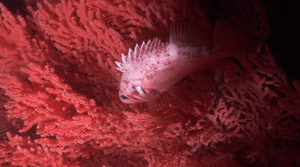 A rockfish hides in a red tree coral (Primnoa pacifica).

The deep passageways and thin continental shelf leads to unique connections between offshore and inshore waters. The colder water temperature, nutrient-rich upwelling, and strong currents allow for many species that live in deeper water to survive in the shallower waters.

The corals in this area, such as Primnoa pacifica, have contributed to the location being labeled as Habitat Areas of Particular Concern. P. pacifica is typically a deep water coral normally found between 150 metres (490 ft) and 900 metres (3,000 ft); however, in the Tracy Arm it is found between 20 feet (6.1 m) and 100 feet (30 m), offering a unique opportunity for research.

All content from Kiddle encyclopedia articles (including the article images and facts) can be freely used under Attribution-ShareAlike license, unless stated otherwise. Cite this article:
Tracy Arm Facts for Kids. Kiddle Encyclopedia.