Petersburg (Tlingit: Séet Ká or Gantiyaakw Séedi "Steamboat Channel") is a census-designated place (CDP) in and essentially the borough seat of Petersburg Borough, Alaska, United States. The population was 3,043 at the 2020 census, up from 2,948 in 2010.

The borough encompasses Petersburg and Kupreanof, plus mostly uninhabited areas stretching to the Canadian–American border and the southern boundary of the City and Borough of Juneau. While the city of Petersburg ceased to exist as a separate administrative entity (the borough assembly created a service area to assume operation of the former city's services), the tiny city of Kupreanof remains separate within the borough. 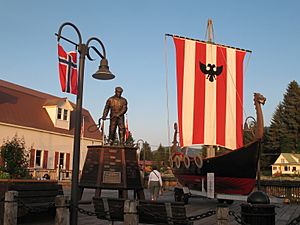 Founded by the Norwegian immigrant Peter Buschmann, Petersburg is known for its strong Norwegian traditions and nicknamed "Little Norway".

Tlingits from Kupreanof Island had long used a summer fish camp at the north end of Mitkof Island. Earlier cultures of indigenous people also used the island: remnants of fish traps and some petroglyphs have been carbon-dated back some 1,000 years.

European explorers to Mitkof Island encountered the Tlingit. In the nineteenth century, Peter Buschmann, a Norwegian immigrant, settled here, building a cannery, sawmill, docks and early structures. The settlement was named Petersburg after him, and it flourished as a fishing port. (Icebergs from the nearby LeConte Glacier provided a source for cooling fish). Petersburg originally incorporated as a town on April 2, 1910. The town had attracted mostly immigrants of Scandinavian origin, thus giving Petersburg the nickname "Little Norway". The Sons of Norway hall was built on one of the piers. Three other canneries were built and the four have operated continuously since. With the establishment of the cannery, Alaskan Natives, including Chief John Lott, began to work there and live year-round at the site.

The 1939 Slattery Report on Alaskan development identified the region as one of the areas where new settlements would be established through Jewish immigration. This plan was never implemented.

Fisheries were the mainstay of the economy. In 1965, Petersburg fishermen founded Icicle Seafoods. Fishermen Gordon Jensen and Magnus Martens teamed up with managers Tom Thompson and Bob Thorstenson, Sr. to organize a group of fishermen to purchase the Pacific American Fisheries (PAF) plant (the original Buschmann cannery) at a time when the seafood industry seemed in decline. PAF was traded on the NYSE and had been one of the largest processors in Alaska for a half century. The shareholders, including Board members Fred File, Fred Haltiner, Jr., Robin Leekley, Jeff Pfundt, Aril Mathisen, Bud Samuelson and many others (Hofstads, Otness, and Petersons to name a few) began their work to create, improve and institute the fisheries that sustain Petersburg and many other coastal communities in Alaska today. The company was originally known as PFI but in 1977 changed its name officially to Icicle Seafoods.

Petersburg incorporated as a borough in January 2013, encompassing Petersburg and Kupreanof, plus mostly uninhabited areas stretching to the Canada–US border and the southern boundary of the City and Borough of Juneau. While the City of Petersburg ceased to exist as a separate entity (the borough assembly created a service area to assume operation of the former city's services), the tiny city of Kupreanof remains separate within the borough.

Petersburg is located on the north end of Mitkof Island, where the Wrangell Narrows meets Frederick Sound. Petersburg is halfway between Juneau, 190 km (120 mi) to the north, and Ketchikan, 180 km (110 mi) to the south.

Mitkof Island is largely covered by low mountains. The lowlands are mainly made up of muskeg, a type of soil made up of plants in various states of decomposition. It is approximately 20 miles from its north end to its south. The western side of the island borders the Wrangell Narrows, one of the six listed in Southeast Alaska. The Narrows provides a somewhat protected waterway for boats, and opens on the south end of the island into Sumner Straits. Mitkof Island has many creeks that empty into the Narrows, including Blind Slough, Falls Creek, Twin Creeks, and Spirit Creek.

According to the National Marine Fisheries Service, the town is the 15th-most lucrative fisheries port in the United States by volume. In 2011, 101 million pounds of fish and shellfish passed through Petersburg, with a dockside value of $65 million. That year Petersburg ranked as 13th in the nation in terms of the value of its catches. 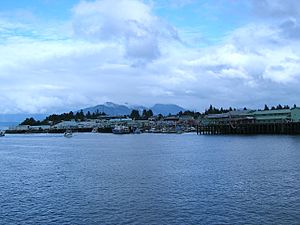 A view of the Petersburg waterfront.

Petersburg first appeared on the 1910 U.S. Census and incorporated that same year. In 2013, upon the creation of the Borough of Petersburg, it became a census-designated place (CDP).

There were 1,240 households, out of which 38.4% had children under the age of 18 living with them, 54.2% were married couples living together, 9.3% had a female householder with no husband present, and 31.5% were non-families. 25.5% of all households were made up of individuals, and 6.6% had someone living alone who was 65 years of age or older. The average household size was 2.56 and the average family size was 3.11.

Located on an island with no bridges to the mainland, Petersburg can be accessed only by air or sea.

Petersburg receives service from the Alaska Marine Highway. Petersburg is a stop on its Inside Passage route that sees scheduled service both southbound and northbound to other Southeast Alaskan communities, Bellingham, Washington and Prince Rupert, British Columbia Canada. 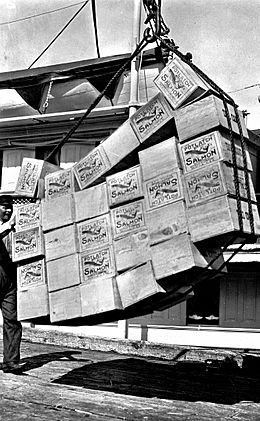 For a brief time during a peak period of the commercial fishing industry, Petersburg was rumored to have the highest per-capita income for a working town in the U.S.

Commercial fishing is the dominant economic driver of Petersburg's economy. The top producers harvest well over a million dollars of seafood each and every year. While there is a vibrant salmon troll and gillnet fleet, as well as participants in the dungeness crab and dive fisheries, the main producers in Petersburg are the 58-foot limit 'seiners'. These 58-footers harvest salmon, halibut, black cod, king, tanner crab, and herring. Many of them travel west to trawl, longline and pot cod in the western Gulf of Alaska and the Bering Sea.

Currently making a comeback in the worldwide salmon markets, the 58-foot fleet now boasts crew jobs that can approach six figures. The sustainability of all commercially harvested resources has been a trademark of the fisheries participated in by Petersburg fishermen. Petersburg Vessel Owners Association, resurrected by Gordon Jensen in the 1980s, is the lead association that ensures that all seafood harvested by the Petersburg fleet is done so in a sustainable manner, consistent with the conservation principles embodied in the state of Alaska constitution.

Petersburg also maintains a large contingent of Bristol Bay fishermen. Over 75 Petersburg residents travel each summer to fish commercially on around 35 Bristol Bay vessels in Naknek, Dillingham and King Salmon.

Small cruise-ships (up to 250 passengers) and private yachts visit from May through September. Petersburg has a high-quality visitor experience, with very few of the crowds or tourist peaks experienced by the neighboring communities of Juneau, Sitka and Ketchikan. Partially this is by design and partially this is a result of the natural difficulty of landing large ships in Petersburg and traveling through the treacherous waters south of town at the Wrangell Narrows.

In 2011, Seth Morrison and a host of famous skiers filmed their experiences helicopter skiing in the mountains near Petersburg. Sport fishing experiences have been a well-kept secret in the Petersburg area as well.

All content from Kiddle encyclopedia articles (including the article images and facts) can be freely used under Attribution-ShareAlike license, unless stated otherwise. Cite this article:
Petersburg, Alaska Facts for Kids. Kiddle Encyclopedia.