Chefornak (Central Yupik: Cevvʼarneqcode: esu is deprecated ) is a city in Bethel Census Area, Alaska, United States. At the 2010 census its population was 418, up from 394 in 2000.

Located in a region where the arctic tundra meets and interacts with the Bering Sea, as well as being in a region impacted by past volcanism, Chefornak has many interesting local landmarks.

An extinct volcano, Tern Mountain, is visible in the distance to the south. Large, blocky, igneous rocks are a common sight in the village and the surrounding tundra.

The Kinia River (Urrsukvaaq) and its many tributaries are important to the people of the village, because of water travel to hunting and fishing areas, as well as because of difficulties presented by flooding and erosion.

Chefornak first appeared on the 1950 U.S. Census as an unincorporated village. It formally incorporated in 1974.

There were 75 households, out of which 60.0% had children under the age of 18 living with them, 61.3% were married couples living together, 13.3% had a female householder with no husband present, and 16.0% were non-families. 14.7% of all households were made up of individuals, and none had someone living alone who was 65 years of age or older. The average household size was 5.25 and the average family size was 5.98.

Yup'ik dancing is popular in the village. The high school has an Yup'ik Dance Team which often visits other villages for feasts and festivals. Often the village hosts a dance festival in April, and the large Camai-i festival in Bethel attracts many from Chefornak and the surrounding villages to display their dances and to see the dances of other regions.

Many of the villagers live a subsistence lifestyle, which means that they continue to carry out the traditional hunter-gatherer activities of their ancestors. One of the foods that they rely on is fish such as halibut, salmon, and herring, which are dried and eaten like jerky. Berries such as salmonberries (cloudberries), black berries (crowberries), and blueberries (bog bilberries) are also gathered and used to prepare akutaq. Other native foods that are gathered include mousefood, Labrador tea, and greens such as sourdock. 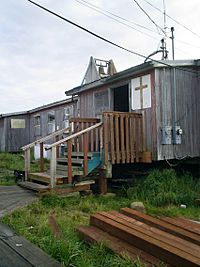 Beside houses, there are only a handful of buildings in the village: 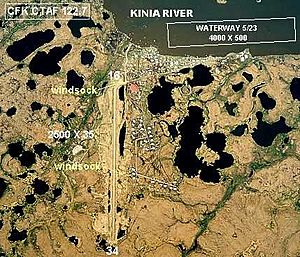 Transportation into the village of Chefornak occurs primarily by small aircraft, although in the winter the village can be reached by snow machine as well. Goods and mail are brought into the village by plane, and during the summer months are brought up the Kinia River by barge. Chefornak's airport is in the process of being moved further from the village due to concerns with its proximity to the school. The new airstrip has been constructed, but the gravel must settle for several years before the airstrip is usable. Within the village, transportation options include four-wheel, bicycle, snow machine, and on foot. 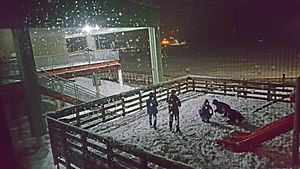 Kids recreating in the school playground

The Lower Kuskokwim School District operates the Chaputnguak School, an elementary school, and Amaqigciq School, a high school, which share a building.

The Chaputnguak School was named for Chaputnguak, the original name for Chefornak and a Yup'ik word referring to an object or thing obstructing a pathway. The Amaqigciq School is named after Alexie Amaqigciq, a Yup'ik elder who selected the village site and first inhabitant of Chefornak, .

All content from Kiddle encyclopedia articles (including the article images and facts) can be freely used under Attribution-ShareAlike license, unless stated otherwise. Cite this article:
Chefornak, Alaska Facts for Kids. Kiddle Encyclopedia.