Like many isolated communities in Alaska, the city has no road or rail connections to the outside world, and must be accessed by sea or by air at Point Hope Airport. 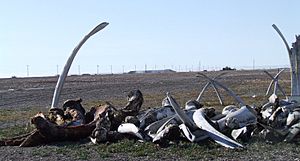 A pile of whale bones in Point Hope, at the spot where celebrations are held at the conclusion of the whaling season.

Before any modern settlement, the Ipiutak lived here.

The descriptive Inuit name of the place, "Tikarakh" or "Tikigaq", commonly spelled "Tiagara", means "forefinger". It was recorded as "Tiekagagmiut" in 1861 by P. Tikhmeniev Wich of the Russian Hydrographic Department and on Russian Chart 1495 it became "Tiekaga". This ancient village site was advantageous, because the protrusion of Point Hope into the sea brought the whales close to the shore. At Tikigaq, they built semi-subterranean houses using mainly whalebone and driftwood. Point Hope is one of the oldest continually occupied sites in North America. While some of the earlier dwellings have been lost to erosion as the point shrinks, it still provides a welter of valuable information to archaeologists on how early Eskimos survived in their harsh environment. The Tikigaq site is "by far the most extensive and complete one-period site yet discovered and described in the entire circumpolar region." - Helge Larsen.

The first recorded Europeans to sight this cape were Russian explorers Mikhail Vasiliev and Gleb Shishmaryov of the Imperial Russian Navy on the ships Otkrietie and Blagonamierennie. Vasiliev and Shishmaryov named this landhead Mys Golovnina, after Vice Admiral Vasily Golovnin (1776–1831).

The cape at Point Hope was renamed by Captain Frederick William Beechey of the Royal Navy, who wrote on August 2, 1826: "I named it Point Hope in compliment to Sir William Johnstone Hope". According to Archdeacon Stuck Hope was from a "well-known house long connected with the sea".

Point Hope residents successfully opposed Project Chariot in 1958. The project would have involved buried thermonuclear detonations some 30 miles (48 km) from the village to create a deep-water artificial harbor, which would only have been usable about three months out of the year.

There were 186 households, out of which 54.8% had children under the age of 18 living with them, 50.0% were married couples living together, 19.4% had a female householder with no husband present, and 18.3% were non-families. 13.4% of all households were made up of individuals, and 2.2% had someone living alone who was 65 years of age or older. The average household size was 4.07 and the average family size was 4.50.

All content from Kiddle encyclopedia articles (including the article images and facts) can be freely used under Attribution-ShareAlike license, unless stated otherwise. Cite this article:
Point Hope, Alaska Facts for Kids. Kiddle Encyclopedia.