Kids Encyclopedia Facts
Not to be confused with the Wrangell Mountains or Wrangell–St. Elias National Park and Preserve, farther northwest in Alaska. 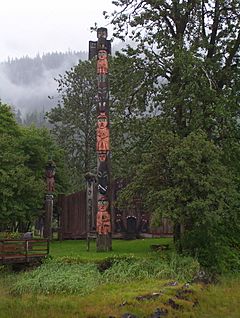 Totem poles at the Shakes house

The City and Borough of Wrangell (Tlingit: Ḵaachx̱aana.áakʼw) is a borough in the U.S. state of Alaska. As of the 2010 census the population was 2,369. Incorporated as a Unified Home Rule Borough on May 30, 2008, Wrangell was previously a city in the Wrangell-Petersburg Census Area (afterwards renamed the Petersburg Census Area (the Petersburg Borough was formed from part of this census area)). Its Tlingit name is Ḵaachx̱aana.áakʼw (“Ḵaachx̱an’s Little Lake” with áa-kʼw ‘lake-diminutive’). The Tlingit people residing in the Wrangell area, who were there centuries before Europeans, call themselves the Shtaxʼhéen Ḵwáan after the nearby Stikine River. Alternately they use the autonym Shxʼát Ḵwáan, where the meaning of shxʼát is unknown.

Tlingit people and their ancestors have inhabited this island for thousands of years. According to Naanyaa.aayí clan traditions, Tlingit people migrated down the Stikine River during a time when the river still flowed underneath glaciers. The population slowly moved down the river, settling in different locations such as Tlákw.aan "Ancient Village", Sʼiknáx̱ "Across from the Grass", Shaal.aan "Fish Trap Town", Xakw.aan "Sandbar Village", and Kayáash "Platform", Hehl (Xel/Xehl) "Foam People", Hehl being the senior of house of the village. Later settlements on the coast included Chʼuxʼáasʼaan "Waterfall Town" (now Mill Creek), Ḵeishangita.aan "Red Alder Head Village" (site of the Wrangell Institute at Shoemaker Bay), Kʼaatsʼḵu Noow "Among the Sharps Fort" (now Anita Bay), An.áan "Village that Rests" (now Anan Bear Viewing Area), and many others. The numerous petroglyphs found at Petroglyph Beach just north of Wrangell, as well as those scattered on the beaches of the many islands in the vicinity, attest to the long Tlingit occupation.

It is also known and somewhat forgotten, that first peoples coastal migration to the Stikine River happened from the south. The Nass River people had several migrations into the area. The "Git Setti" people tell of their migration story in a totem raised in Wrangell in 1894 called "Kickssetti" Totem.

The salt water inlet that is now Wrangell Harbor was traditionally called Ḵaachx̱ana.áakʼw, literally "Ḵaachx̱án’s little lake". Before the harbor mouth was dredged and cleared in the late 19th century, the mouth of this inlet would often go dry at low tide, which led to its being called a lake.

Wrangell was founded by Russians as one of the oldest non-Native settlements in Alaska. They started trading for furs with area Tlingit in 1811 at the site of present-day Wrangell. In 1834, Baron Ferdinand Petrovich Wrangel, then head of Russian government interests in Russian America, ordered a stockade built near the Naanyaa.aayí clan house of Chief Shakes, called Shéiksh Hídi. This house was located about 13 miles (21 km) north of Old Wrangell, on a small island in the middle of what is today Wrangell Harbor. The stockade, named Redoubt Saint Dionysius (Редутъ Санктъ Дионисіусъ), was founded at the location of present-day Wrangell and stood near the end of the small peninsula that forms the northeastern side of the mouth of the harbor.

The British Hudson's Bay Company (HBC) leased the fort in 1839 and named the stockade Fort Stikine. The Tlingit had used the Stikine River as a trade route to the interior since ancient times, and they protested when the Hudson's Bay Company began to use their trade routes. Two epidemics of smallpox in 1836 and 1840 sharply reduced the Tlingit population in the area by half, as they had no acquired immunity, and silenced most of the protest.

The HBC abandoned the fort in 1849 after the area’s stocks of sea otter and beaver were depleted, ending the fur trade. Fort Stikine remained under British rule until Alaska's purchase by the United States in 1867.

In 1868, the U.S. built a military post called Fort Wrangell at the site, and it remained active until 1877. The community around the post continued to grow through commerce with prospectors in the gold rushes of 1861, 1874–77, and 1897. As in Skagway, businessmen looking to make money off the miners built many gambling halls, dance halls, and bars. Thousands of miners traveled up the Stikine River into the Cassiar District of British Columbia during 1874, and again to the Klondike in 1897.

In 1877, the first Presbyterian church in Alaska, the first Protestant church of any kind in the area, was founded near its current location at 220 Church Street. Reverend S. Hall Young, a colleague of Sheldon Jackson, was assigned to the Wrangell mission and arrived on July 10, 1878. He worked among both miners and Tlingits. He established the Fort Wrangell Tlingit Industrial School to teach young Tlingit men various American trades, such as printing, boatbuilding, and construction. This institution was a parallel to Sheldon Jackson’s Sitka Industrial Training School, which became Sheldon Jackson College. Young's school was the nucleus of the later Wrangell Institute, a boarding school for Alaska Natives through the mid-20th century.

S. Hall Young was a friend and companion of the naturalist John Muir, who lived in Wrangell in 1879-1880. Muir and Young traveled up the Stikine River, as well as to Kake, Glacier Bay, and elsewhere in Southeast Alaska. Young and Muir were accompanied by two Stikine elite men, Tʼaawyaat ("Toyatte", lit. Long Feather), and Kaadaashaan ("Kadachan"), as well Sitka Charley, as a young man who was their interpreter in Chinook Jargon and English.

Having been Tlingit territory and then under the jurisdiction of Russia, Great Britain, and the United States, Wrangell has the unique status as the only Alaskan city to have been governed under four "flags". 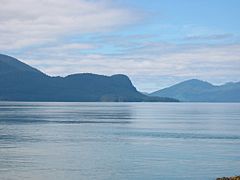 Fish traps were constructed in the late 1890s on the nearby mouth of the Stikine River and in the Zimovia Strait. These contributed to the growth of the fishing and fish canning industries in Wrangell, which provided much of the economic life for the town before the rise of logging in the 1950s. The fish traps caused severe damage to the Stikine River salmon runs, reducing the number of fish that managed to spawn and causing a decline in salmon runs and fishing in the region. After statehood, the new government decommissioned all fish traps in Alaska. The fishing industry remained strong, and continues to be the primary occupation of many residents.

The weekly newspaper, The Wrangell Sentinel, was founded in 1902, and printed its first issue on November 2 of that year. The newspaper remains in publication with only a few short periods of inactivity. It is the oldest continuously published newspaper in Alaska.

The renowned Bear Totem Store, built in the 1920s by Walter Waters, housed innumerable examples of Tlingit arts and crafts, as well as a number of irreplaceable totem poles. Waters began his business career carrying mail by boat from Wrangell to Sulzer. During this period, he traveled throughout southeast Alaska as a fur buyer. While on business travels, Waters began to acquire Indian artifacts and make valuable contacts with Indian artisans. He eventually enabled him to open his curio shop, The Bear Totem Store.

A severe fire in the early 1950s burned much of the downtown area, destroying the Bear Totem Store and most of its contents. Few historic buildings remained after the fire. The disaster dramatically changed the face of Wrangell, and with new buildings, the past was lost.

Logging, fishing and tourism are the current mainstays of the Wrangell area economy. One of the last two major sawmills in southeast Alaska is operated by the Silver Bay Logging Company just south of the city proper.

The community has always been a center of the Tlingit Kaach.àdi, Kiks.ádi and Naanyaa.aayí clans, as well as the only home of the Kayaashkiditaan, Sʼiknax̱.ádi, X̱ookʼeidí, Kaasx̱ʼagweidí, and Taalḵweidí clans. Chief Shakes Tribal House, which is known in Tlingit as Shéiksh Hídi "Shakes House", is a replica of traditional Tlingit houses. It was constructed by CCC crews in the 1930s of the Great Depression, according to traditional knowledge and methods. It stands at the original location of Shakes House, on Shakes Island inside Wrangell harbor. Today the Wrangell Cooperative Association, a Tlingit IRA council and the federally recognized tribe for the area, maintains Shakes Island and the House, as well as Totem Park near the city center. 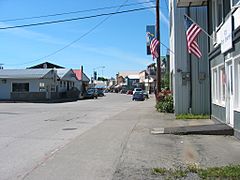 In an election held on May 6, 2008, to decide whether to upgrade from city to borough status, 63.99% of the votes were in favor of borough status. On May 30, 2008, Wrangell was reincorporated as the City and Borough of Wrangell. Canadian American Donald McConachie Sr. was the CBW's first mayor. He was succeeded by Jeremy M. Maxand, but was elected in 2012 as mayor again after Maxand declined to seek reelection.

The Wrangell Cooperative Association has commissioned a team to restore Chief Shakes House and the totems at Totem Park. It consists of a master carver, Wayne Price, and six assistants, four of them women accepted after intensive training in the use of the traditional adze tool.

Wrangell is located on the northern tip of Wrangell Island, an island in the Alaska Panhandle. It is 155 miles (250 km) south of the Alaskan capital of Juneau. It is across the narrow Zimovia Strait from the mouth of the Stikine River on the Alaska mainland. The town is named after the island, which was named after Ferdinand Petrovich Wrangel, a Russian explorer and the administrator of the Russian-American Company from 1830 to 1835.

According to the Köppen climate classification system, Wrangell has an Oceanic climate (Cfb).

There were 907 households out of which 35.7% had children under the age of 18 living with them, 54.9% were married couples living together, 9.4% had a female householder with no husband present, and 31.3% were non-families. 26.5% of all households were made up of individuals and 9.6% had someone living alone who was 65 years of age or older. The average household size was 2.52 and the average family size was 3.05.

In 1943 the federal Treasury Section of Fine Arts commissioned artist Austin Mecklem and his wife, Marianne Greer Appel, to paint a mural, Old Town in Alaska, intended for the Wrangell post office. The work was completed at their studio in New York state, transported via railway on Oct 19, 1943, arrived in Wrangell in December 1943 and installed in early 1944. 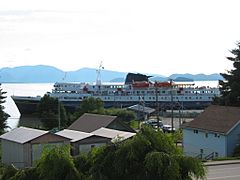 Being located on Wrangell island, Wrangell has two basics forms of transportation: ferry and airplane. While on the island, a network of paved roads and multiple miles of logging trails remain.

The Alaska Marine Highway serves Wrangell on its Inside Passage route with regular northbound and southbound stops that link it to the rest of Southeast Alaska.

Wrangell is also a stop on the summer Monday, Friday, & Saturday runs of the Inter-Island Ferry Authority's M/V Stikine. Its round-trip run originates in Coffman Cove on Prince of Wales Island, continues on to Wrangell, and Petersburg as the furthest stop, returning to Wrangell, and Ketchikan. 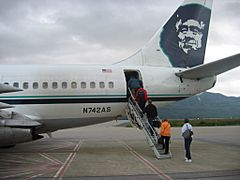 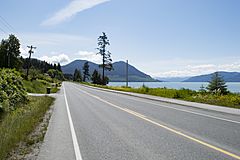 View of the Zimovia Highway just south of town

The primary road is the Zimovia highway which runs along the west side of the island for 14 miles. Apart from the highway and most roads in town, the rest are unpaved, logging trails, forest service roads, and hiking trails.

All content from Kiddle encyclopedia articles (including the article images and facts) can be freely used under Attribution-ShareAlike license, unless stated otherwise. Cite this article:
Wrangell, Alaska Facts for Kids. Kiddle Encyclopedia.