The Stikine River (Tlingit: Shtaxʼhéen) is a river, historically also the Stickeen River, approximately 610 kilometres (380 mi) long, in northwestern British Columbia in Canada and in southeast Alaska in the United States.

Its Grand Canyon represents the top grade in difficulty for a kayak descent. Considered one of the last truly wild major rivers in British Columbia, it drains a rugged, largely pristine, area east of the Coast Mountains, cutting a fast-flowing course through the mountains in deep glacier-lined gorges to empty into Eastern Passage, just north of the city of Wrangell, Alaska, which is situated at the north end of Wrangell Island in the Alexander Archipelago.

The name in Coast Tsimshian dialect is Stikʼiin and is a name for the Tahltan people who live up in the river's interior. They, Tsimshian-Nisga, named the river after the people who lived on it. The BC Names branch, however, say its Tlingit meaning is "great river" or "the definitive, or great river" as reported by Captain Rowan of the Boston trader Eliza in 1799. Its Russian name, first reported in Russian was ryeka Stahkin (река Стакин), in 1848, changed to its current form in 1869 after the Alaska Purchase in 1869. In the wording of that a letter to Secretary Seward, "Purchase of the Russian Possessions in North America by the U.S.A.", a letter from a Mr. Collins, dated 4 April 1867, New York, was St. Francis River. It has also been known as Pelly's River, and variously spelled Shikene, Stachine, Stachin, Stah-Keena, Stahkin, Stakeen, Stickeen, Stickienes, Stikeen, Stikin, Sucheen. 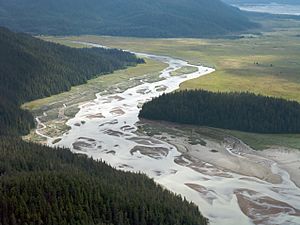 Braided channels of the Stikine River near Little Dry Island

The Stikine River arises in the Spatsizi Plateau, the southeasternmost subplateau of the Stikine Plateau, a large and partly mountainous plateau lying between the Stikine Ranges of the Cassiar Mountains (E) and the Boundary Ranges (W) in northern British Columbia. From there the river flows in a large northward arc turning to the west and southwest, past the gold rush and Tahltan community of Telegraph Creek. Above Telegraph Creek is the spectacular 45-mile-long (72 km) and 300-metre-deep (980 ft) Grand Canyon of the Stikine, the upper end of which is in the area of 130° west longitude. Below Telegraph Creek, which was at the head of river navigation during the Stikine and Cassiar Gold Rushes, the river cuts through the Tahltan Highland and in this region are the confluences of the Tuya and Tahltan Rivers. Much farther down, nearer the U.S. border, is the confluence of the Iskut and several other notably large (though short) rivers such as the Porcupine and Chutine. After passing Great Glacier and Choquette Hot Springs Provincial Parks and the old border-station at Stikine, British Columbia, it passes through a steeply cut gorge in the Boundary Ranges along the Canada–U.S. border, and above that Grand Canyon of the Stikine. It briefly enters southeast Alaska for its lower 64 kilometres (40 mi) to form a delta opposite Mitkof Island, approximately 10 kilometres (6.2 mi) north of Wrangell. The Stikine's north arm empties into Frederick Sound while its main arm and southern distributaries empty into Sumner Strait and Stikine Strait. Other oceanic bodies of water that are influenced by the Stikine's estuary include the fjord-channel Eastern Passage separating Wrangell Island from the mainland and the shallow tidal Dry Strait separating Mitkof Island from the mainland.

The outlet of the river is now in Alaska, but at the time of the boundary survey in 1901–03 it had been at the boundary; the lower part of the river has since filled in from aggradation. According to the terms of the treaty, as per prior usage by mining and commercial traffic in the Stikine, Canadian marine traffic technically has the right of navigation of this river from the sea, independent of U.S. border controls, but this is no longer in practical effect through disuse and because of the relocation of the river's mouth.

The Stikine's main tributaries are, in descending order from its source: 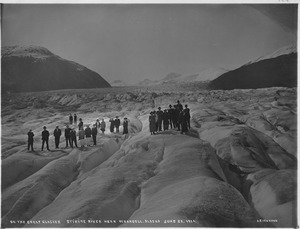 Visitors on the Great Glacier near the Stikine River in 1914

The river is navigable for approximately 210 kilometres (130 mi) upstream from its mouth. It was used by the coastal Tlingit as a transportation route to the interior region. The first European to explore the river was Samuel Black, who visited the headwaters during his Finlay River expedition in 1824. It was more extensively explored in 1838 by Robert Campbell, of the Hudson's Bay Company, completing the last link in the company's transcontinental canoe route. In 1879 the lower third was travelled by John Muir who likened it to "a Yosemite that was a hundred miles long". Muir recorded over 300 glaciers along the river's course. The Grand Canyon of the Stikine has been successfully navigated by less than 50 expert whitewater kayakers. It is considered one of the world's most difficult whitewater rivers in that particular section.

The 1862 Pacific Northwest smallpox epidemic, which started in Victoria, devastated the Stikine River Tlingit. Groups of Tlingit camped near Victoria were forced to return to their homelands. The gunboat HMS Topaz escorted Tlingit canoes from Victoria to southeast Alaska. Smallpox ravaged the Stikine area over the 1862 summer, killing over 60%.

From 1897 to 1898 it was one of the laborious routes to the Klondike Gold Rush in the Yukon Territory. Several railway schemes were floated to provide an "All Canadian" route to the Dawson goldfields—A Teslin Railway, Omineca Railway, and the Canadian Yukon Railway promoted by the CPR. Railway contractors were hired and ready to build the route, though the Federal Senate and American government prevented the 500-mile (800 km) project from proceeding. Several river steamers were built to haul materials to Glenora to aid the project. The first road bridge was built across the river in the 1970s as part of the Stewart-Cassiar Highway.

In 1978, BC Hydro began to study the feasibility of building a two-dam project on the Stikine, but the plan quickly led to opposition by conservation groups and a long struggle over the fate of the river. The mouth of the river in Alaska provides a habitat for migratory birds and is protected as part of the Stikine-LeConte Wilderness Area.

The Canadian Navy vessel CFAV Stikine (YPT-612) (TSRV) is named for this river.

All content from Kiddle encyclopedia articles (including the article images and facts) can be freely used under Attribution-ShareAlike license, unless stated otherwise. Cite this article:
Stikine River Facts for Kids. Kiddle Encyclopedia.