Gambell (GAM-bull) (Central Siberian Yupik: Sivuqaq) is a city in the Nome Census Area of the U.S. state of Alaska. Located on St. Lawrence Island, it had a population of 681 at the 2010 census.

Sivuqaq is the Yupik language name for St. Lawrence Island and for Gambell. It has also been called Chibuchack and Sevuokok.

St. Lawrence Island has been inhabited sporadically for the past 2,000 years by both Alaskan Yup'ik and Siberian Yupik people. In the 18th and 19th centuries, the island had a population of about 4,000.

Between 1878 and 1880 a famine decimated the island's population. Many who did not starve left. The remaining population of St. Lawrence Island was nearly all Siberian Yupik.

In 1887, the Reformed Episcopal Church of America decided to open a mission on St. Lawrence Island. That year a carpenter, lumber and tools were left at Sivuqaq by a ship. The carpenter worked with local Yupik to build a wood building, the first they had ever seen. When the building was finished, the carpenter left the keys to the door with a local chief and departed. Since the carpenter had not spoken Siberian Yupik, the residents did not know the purpose of the building.

The Reformed Episcopal Church had not been able to find missionaries willing to live on St. Lawrence Island, so the building built for the mission was left unoccupied. In 1890, the building was acquired by Sheldon Jackson. He spoke to the Reverend Vene and Nellie Gambell, of Wapello, Iowa, about moving to St. Lawrence Island. Gambell was hired as a schoolteacher and the Gambells came to the island in 1894. They had a daughter in 1897. Nellie Gambell became ill and the Gambells spent the winter of 1897-1898 in the United States, where Nellie was hospitalized. In the spring of 1898 they embarked on a return journey to St. Lawrence Island on the schooner Jane Gray. The ship sank in a storm and 37 people on it drowned, including the Gambells and their daughter.

After their death, Sivuqaq was renamed in the Gambells' honor.

On June 22, 1955, during the Cold War, a US Navy P2V Neptune with a crew of 11 was attacked by two Soviet fighters in international waters over the Bering Straits between Siberia and Alaska, and crashed near Gambell, where the crew was rescued (3 wounded by Soviet fire; 4 injured in crash.) The Soviet Government, in response to a US diplomatic protest, was unusually conciliatory, stating that:

There was an exchange of shots after a Soviet fighter advised the US plane that it was over Soviet territory and should leave (the US denied that the US plane fired at all).

The incident took place under heavy cloud cover and poor visibility, although the alleged violation of Soviet airspace could be the responsibility of US commanders not interested in preventing such violations.

The Soviet military was under strict orders to "avoid any action beyond the limits of the Soviet state frontiers."

The Soviet Government "expressed regret in regard to the incident."

The Soviet Government, "taking into account... conditions which do not exclude the possibility of a mistake from one side or the other," was willing to compensate the US for 50% of damages sustained—the first such offer ever made by the Soviets for any Cold War shootdown incident.

The US Government stated that it was satisfied with the Soviet expression of regret and the offer of partial compensation, although it said that the Soviet statement also fell short of what the available information indicated.

Gambell and Savoonga received joint title to most of the land on St. Lawrence Island under the Alaska Native Claims Settlement Act of 1971.

On August 30, 1975, Wien Air Alaska Flight 99 crashed when trying to land in Gambell. 10 of the 32 passengers and crew on board were killed.

Gambell is located on the northwest cape of St. Lawrence Island in the Bering Sea, 325 km (202 mi) southwest of Nome. It is 58 km (36 mi) from the Chukchi Peninsula in the Russian Far East. 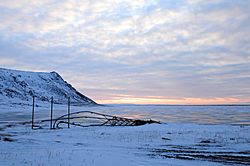 The town is served by Gambell Airport.

There were 159 households out of which 51.6% had children under the age of 18 living with them, 43.4% were married couples living together, 18.2% had a female householder with no husband present, and 23.3% were non-families. 18.2% of all households were made up of individuals and 0.6% had someone living alone who is 65 years of age or older. The average household size was 4.08 and the average family size was 4.82.

All content from Kiddle encyclopedia articles (including the article images and facts) can be freely used under Attribution-ShareAlike license, unless stated otherwise. Cite this article:
Gambell, Alaska Facts for Kids. Kiddle Encyclopedia.