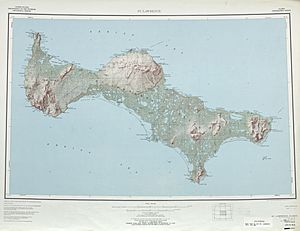 St. Lawrence Island is an island found in the Bering Sea, west of the U.S. State Alaska. The island has an area of 4,640 square kilometers, and is 140 km long, and 35 km wide. The island is part of Alaska, although it is closer to Russia. The island is a one of the last above water parts of the ancient landmass known as Beringia. It is the sixth largest island in the United States, and is the 113th largest island in the world. In 2010, 1,292 people lived on the island, most of which live in the two main villages of Savoonga and Gambell.

The island is thought to have been home to several old natives, mostly by the Siberian Yupik around 2,500 years ago.

During the Cold War, a P2V Neptune by the US Navy were shot down by the Soviet with two fighter planes, forcing it to fly down to Gambell Airport, where the plane crashed. None of the 11 onboard were killed, but 7 were injured.

The island has two main airports, one at Gambell and another at Savoonga. There is another old airport at the east end of the island, which used to be a part of an old military base. The island can be travelled to by boat as well.

All content from Kiddle encyclopedia articles (including the article images and facts) can be freely used under Attribution-ShareAlike license, unless stated otherwise. Cite this article:
St. Lawrence Island Facts for Kids. Kiddle Encyclopedia.