Anaktuvuk Pass (Inupiaq: Anaqtuuvak Anaqtuġvik or Naqsraq) is a city in North Slope Borough, Alaska, United States. The population was 282 at the 2000 census and 324 as of the 2010 census. 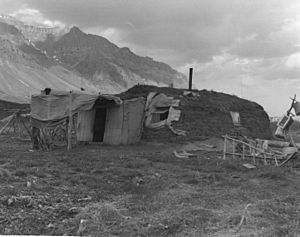 A sod house in Anaktuvuk Pass in 1957, shortly after the village was established.

Anaktuvuk Pass was named after the Anaktuvik River. Anaktuvuk is the English way of spelling annaqtugvik place of caribou droppings in Inupiaq, the language of the Inupiat.

There was a nomadic group of Inupiat called Nunamiut that lived inland in northern Alaska and lived by hunting caribou instead of the marine mammals and fish hunted by the rest of the Inupiat, who live on the coast. The Nunamiut traded with the coastal people for other items they needed. A decline in caribou populations in about 1900 and in the 1920s caused many Nunamiut to move to the coastal villages. In 1938, several families of Nunamiut moved back to the Brooks Range, around Tulugak and the Killik River. In 1949 the Tulugak group moved to Anaktuvuk Pass and later the Killik River group moved there also. Anaktuvuk Pass is the only Nunamiut settlement.

This settlement attracted Nunamiut from many other locations, and villagers today lead a somewhat more sedentary lifestyle than in earlier nomadic times. The City was incorporated in 1959. A Presbyterian Church was constructed in 1966.

A federally-recognized tribe is located in the community – the Village of Anaktuvuk Pass (a.k.a. Naqsragmiut Tribal Council). The population of the community consists of 88.3% Alaska Natives or part Native. Anaktuvuk Pass is a Nunamiut Eskimo community dependent upon subsistence activities. Sale, importation and possession of alcohol are banned in the village.

Anaktuvuk Pass is slightly north of the Brooks Range on the divide between the Anaktuvuk River and the John River, located at an elevation of 2,200 feet (670 m). Anaktuvuk Pass is the last remaining settlement of the Nunamiut (People of the Land) Iñupiat Inuit in Alaska.

The climate of Anaktuvuk Pass is a tundra climate that shows some characteristics of a subarctic climate; due to its high elevation, summers are cool. The average temperature in January is −14 °F (−26 °C) while temperatures in the summer only reach around 50 °F (10 °C) on average. Extremes recorded in Anaktuvuk Pass are the maximum low being −56 °F (−49 °C) and the maximum high being 91 °F (33 °C). Anaktuvuk Pass receives about 11 inches (280 mm) of rain a year, with snowfall averaging about 63 inches (160 cm) per year. The area is known for its intense winds and 50-below winters and the generic, framed houses built there in the 1970s. The houses are inefficient for such a climate, according to a Fairbanks Daily News Miner story. Anaktuvuk Pass is also the only station in the US to have recorded subzero Fahrenheit temperature in June, with a record low of −1.

Anaktuvuk Pass first appeared on the 1950 U.S. Census as an unincorporated village. It formally incorporated (before statehood) in 1957.

There were 84 households, of which 44.0% had children under the age of 18 living with them, 40.5% were married couples living together, 15.5% had a female householder with no husband present, and 32.1% were non-families. 28.6% of all households were made up of individuals, and 3.6% had someone living alone who was 65 or older. The average household size was 3.36 and the average family size was 4.26. 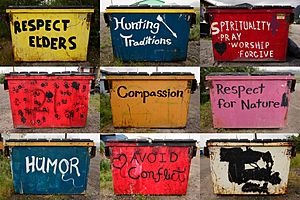 The North Slope Borough provides all utilities to Anaktuvuk Pass. Two central wells and a treated watering point at Nunamiut School serve the town for water. Most households have water delivered by truck to holding tanks. A few residents haul their own water. Almost 80% of homes have running water in the kitchen. A $17 million project, to provide piped water and sewer and household plumbing, began construction in 1996 which will provide flush toilets and showers for all residences. A new landfill is also near completion. Electricity is provided by North Slope Borough.

There is one school located in the community, the Nunamiut School, attended by 94 students.

The Nunamiut's culture is described and preserved through photographs and artifacts at the Simon Paneak Memorial Museum in Anaktuvuk Pass.

Economic and employment opportunities are limited in Anaktuvuk Pass, due to its isolation. Hunting and trapping for sale of skins, guiding hunters, or making traditional caribou skin masks or clothing provides income, though some residents have sought seasonal employment outside the town.

Caribou is the primary source of meat with other subsistence foods including trout, grayling, moose, sheep, brown bear, ptarmigan and water fowl.

Anaktuvuk Pass Airport, consisting of a 4,800 feet (1,463 m) gravel airstrip, is owned and operated by the North Slope Borough, and provides Anaktuvuk Pass with year-round access. A $3.4 million airport improvement project was completed by fall 1999, allowing many air companies to provide passenger flight service to Anaktuvuk Pass. There is no road to Anaktuvuk Pass, but "Cat-trains" transport cargo from the Trans-Alaska pipeline haul road during winter months. Snowmobiles and all-terrain vehicles are used for local transportation, though some standard vehicles are used.

All content from Kiddle encyclopedia articles (including the article images and facts) can be freely used under Attribution-ShareAlike license, unless stated otherwise. Cite this article:
Anaktuvuk Pass, Alaska Facts for Kids. Kiddle Encyclopedia.