Kids Encyclopedia Facts
This page is about the explorer. For the footballer, see Dennis Schmitt (footballer). 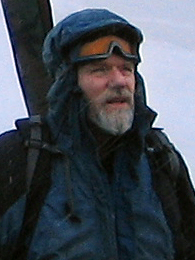 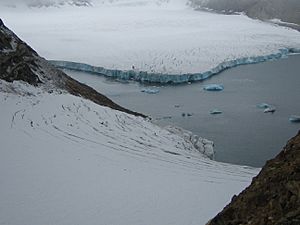 The new strait uncovered by a retreating ice shelf, taken from Warming Island

Dennis Schmitt (born Berkeley, California), is a veteran explorer and adventurer from University of California, Berkeley.

Schmitt grew up in Berkeley, California, the son of mixed German and American parentage. His father was a plumber. He showed early aptitude with languages, music and mathematics, and went on to study linguistics with Noam Chomsky in his late teens. Chomsky recruited Schmitt, aged 19, to travel to Alaska's Brooks Range and attempt to learn the Nunamiut dialect.

Schmitt speaks multiple languages, including Russian, Norwegian, Danish, and French. He lived for four years at an Alaskan Eskimo village named Anaktuvuk Pass before leading expeditions, including the Sierra Club.

In 2003, Schmitt discovered one of the candidates of being the northernmost land in the world. Deciding that Greenland should name its own islands, he simply called it "83-42", a name that has remained.

Two years later, in 2005, Schmitt discovered a new island formed by the retreat of an ice shelf in East Greenland. Uunartoq Qeqertaq, Inuit for "The Warming Island", lies 400 miles north of the Arctic Circle. The Sierra Club reported on a Schmitt quote to The New York Times:

"We felt the exhilaration of discovery. We were exploring something new. But of course, there was also something scary about what we did there. We were looking in the face of these changes, and all of us were thinking of the dire consequences."

Schmitt is also credited with the July 2007 discovery of another of the candidates to the "northernmost island on Earth"-title, named Stray Dog West by expedition member Holly Wenger. Stray Dog West, at 83º40'30", belongs to a shifting, semi-permanent archipelago locked in the sea ice north of Peary Land in northeast Greenland, named the Stray Dog Islands. The first island of the archipelago was discovered on July 10, 1996 by Steve Gardiner and Jim Schaefer and is commonly known as the 1996 ATOW Island after the 1996 American - Top Of The World Expedition.

Schmitt was the first person to climb the highest point of the Daly Range, part of the northernmost mountain chain on Earth, as well as Alaska's Brooks Range from Point Hope to the Mackenzie River, and made the first traverse of Axel Heiberg Island, northern Canada. He also crossed the sea ice of the Bering Straits to the Soviet Union, and travelled through Eskimo villages of eastern Siberia. Upon his return, the FBI detained and released Schmitt without charge.

Schmitt lives in Berkeley. He composes classical music, being credited for the soundtrack to the 1978 movie, The Alaska Wilderness Adventure. Schmitt also writes sonnets under the pen name D O'Farrell.

All content from Kiddle encyclopedia articles (including the article images and facts) can be freely used under Attribution-ShareAlike license, unless stated otherwise. Cite this article:
Dennis Schmitt Facts for Kids. Kiddle Encyclopedia.