Adak /ˈeɪdæk/, formerly Adak Station, (Unangax̂: Adaax) is a town located on Adak Island, in the Aleutians West Census Area, Alaska, United States. At the 2010 census the population was 326. It is the westernmost municipality in the United States and the southernmost city in Alaska. (See Extreme points of the United States.) The city is the former location of the Adak Army Base and Adak Naval Operating Base, NAVFAC Adak. There are no radio stations within 200 miles (320 km) of Adak; radio can be received in Adak only through satellite or shortwave receivers. The shortest days in winter solstice are around 7 hours.

Adak is located on Kuluk Bay, on Adak Island, in the Andreanof Islands group of the Aleutian Islands Recording District, and in the 3rd Judicial District. It lies 1,200 miles (1,930 km) southwest of Anchorage and 450 miles (724 km) west of Dutch Harbor at 51.872° North, 176.636° West (Sec. 10, T096S, R195W, Seward Meridian), near the Russian end of the arc that makes up this volcanic island chain. Flight time to Anchorage is three hours or longer depending on weather. Adak is the southern-most community in Alaska and on the same latitude as Vancouver Island in Canada, and Brussels, Belgium. It is less than three latitudes north of the 49th parallel that forms the western part of the land border between the Contiguous United States and Canada. 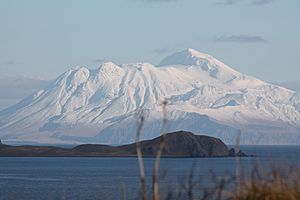 Adak lies in the subpolar oceanic climate zone, characterized by persistently overcast skies, moderated temperatures, high winds, and frequent cyclonic storms. Winter squalls produce wind gusts in excess of 100 knots (120 mph; 190 km/h). During the summer, extensive fog forms over the Bering Sea and North Pacific. Average temperatures range from 20 to 60 °F (−7 to 16 °C), but wind chill factors can be severe. Total precipitation is 64 inches (1,600 mm) annually, with an average accumulated snowfall of 100 inches (2,500 mm), which however tends to melt soon after falling. With 263 rainy days per year, Adak has the second highest number of any inhabited locality in the United States after Hilo, Hawaii.

The Aleutian Islands were historically occupied by the Unanga, more commonly known now as the Aleuts. The once heavily populated island was eventually abandoned in the early 19th century as the Aleutian Island hunters followed the Russian fur trade eastward, and famine set in on the Andreanof Island group. However, they continued to hunt and fish actively around the island over the years, until World War II broke out. Adak Army installations allowed U.S. forces to mount a successful offensive against the Japanese-held islands of Kiska and Attu. After the war, Adak was developed as a naval air station, playing an important role during the Cold War as a submarine surveillance center. Large earthquakes rocked the island in 1957, 1964 and 1977. 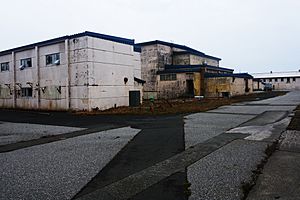 Abandoned military buildings on Adak Island. These buildings house a basketball court, squash court, saunas, bowling alley, and more, all in an unusable state of disrepair.

At its peak, the station housed over 6,000 naval and Coast Guard personnel and their families. In 1994, the base was downsized, and both family housing and schools were closed. The station officially closed on March 31, 1997 for unknown reasons. The Aleut Corporation purchased Adak's facilities under a land transfer agreement with the Department of the Interior and the U.S. Navy/Department of Defense. This agreement was finalized in March, 2004. About 30 families with children relocated to Adak in September 1998, most of them Aleut Corp. shareholders, and the former high school was reopened at that time as a K-12 institution. The community incorporated as a second-class city in April 2001. Substantially all of the infrastructure and facilities on Adak are owned by Aleut Corporation, who is currently developing Adak as a commercial center via their subsidiary companies. For example, properties in active use are leased by Adak Commercial Properties, LLC.

Since World War II, the U.S. Navy and Coast Guard developed facilities and recreation opportunities at Adak. At its peak, Adak had a college, a McDonald's restaurant, movie theater, roller skating rink, swimming pool, ski lodge, bowling alleys, skeet range, auto hobby shop, photo lab, and racquetball and tennis courts. A new $18-million hospital was built in 1990, just seven years prior to the closure of the station. By March 2003, six years after the closure of the station, most of these facilities had closed.

There were 159 households out of which 18.2% had children under the age of 18 living with them, 28.9% were married couples living together, 2.5% had a female householder with no husband present, and 61.6% were non-families. 46.5% of all households were made up of individuals and none had someone living alone who was 65 years of age or older. The average household size was 1.99 and the average family size was 2.90.

A land exchange between Aleut Corp., the U.S. Navy, and the Department of the Interior transferred most of the former naval facilities to the Aleut Corp. in March 2004. A portion of the island remains within the Alaska Maritime National Wildlife Refuge, managed by the United States Fish and Wildlife Service. The U.S. Navy retains part of the north end of Adak Island (Parcel 4) and does annual sweeps of the Andrew Lake Seawall for unexploded ordnance. Their website lists the Institutional Controls in place for all of Adak as part of the land exchange or Interim Conveyance. The Navy provides the trail maps as part of the ordnance awareness information required to be shown to all Adak residents and visitors. Adak currently provides a fueling port and crew transfer facility for a combination of Seattle and Alaskan based fishing fleet — an airport, docks, housing facilities, restaurant, grocery, and ship supply store are available. Adak Fisheries, LLC, an employer of a large seasonal staff, processes Pacific cod, pollock, mackerel, halibut, snow and king crabs. Four residents hold commercial fishing permits, primarily for groundfish. However, commercial fishing vessels based out of Seattle and other parts of Alaska provide most of the work for the fish plant by regularly offloading their catch in Adak.

Because of its naval aviation past, Adak has an unusually large and sophisticated airport for the Aleutian Islands. 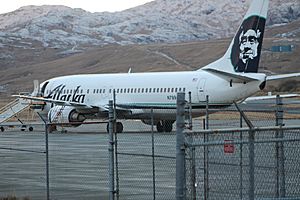 The airport is currently operated by the State of Alaska Department of Transportation. Complete with an Instrument Landing System, Adak Airport has no control tower and two 200' wide asphalt paved runways at 19' elevation. One runway measures 7,790' long while the other runway measures 7,605'. Alaska Airlines operates twice weekly 737-400 Combi passenger and cargo jet service from Anchorage. At present, flights operate each Sunday and Thursday (weather permitting). Occasionally, extra seasonal flights are operated to meet the demand of the fishing season. Other facilities in Adak include three deep water docks and fueling facilities. The city has requested funds to greatly expand the Sweeper Cove small boat harbor, including new breakwaters, a 315-foot (96 m) dock and new moorage floats . There are approximately 16 miles (26 km) of paved and primitive roads on Adak, all privately owned by the Aleut Corporation.

The Aleut are also seeking to develop the water system, which has been well maintained and designed for a larger Naval population, as an export industry. 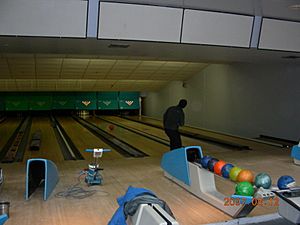 At Kuluk Bowl for bowling August 2007

Land use permits are required for all non-residents visiting Aleut Corporation land. Permits can be obtained from the Aleut Enterprise LLC office in Anchorage, or from the Harbormaster at the Port of Adak.

Aleutian Housing Authority (AHA) is the only provider of lodging on Adak, and offers both long-term and short-term accommodations in former Naval officer housing. Housing units are heated, furnished, and include local telephone and cable TV service. It is advisable to make reservations in advance.

The cabins once maintained within the Alaska Maritime National Wildlife Refuge have fallen into disrepair and are unsafe to occupy. The cabin at Three Arm Bay sits on an archaeological site that was transferred to the Aleut Corporation, and is no longer available for rental to the general public.

Camping is possible without a permit on Alaska Maritime National Wildlife Refuge lands, but is generally not recommended due to the harsh climate. The wind on Adak is highly variable and often unpredictable. Gusts can exceed 100 knots (190 km/h) or more (the record speed is unknown because the wind ripped the anemometer off of the tower). During the calmer summer months, sustained wind speeds average in the low double digits gusting to 50 knots (93 km/h) or more.

Adak offers 16 miles (26 km) of paved and gravel roads. These can be explored on foot, by bicycle, or by renting a truck. There is only one vehicle rental business on Adak. 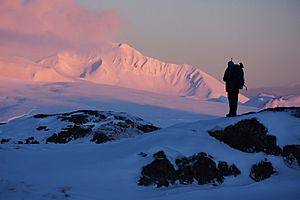 A hunter pauses to scan the landscape. Mt. Moffett, the highest point on Adak, rises in the background.

Hunting and fishing are bountiful sports in Adak. Hunters particularly prize Adak caribou, the largest of which can exceed 700 pounds. There is no bag limit for cows, but in 2007, the Board of Game passed new regulations for bulls. If you want to get to the South end of the island where the majority of the caribou are, there are currently two licensed local boat charter services - Aleutian Adventure Tours and Homeward Bound Charters. Anglers can find large to enormous halibut in the Kagalaska Straits. Hunters must possess an Alaska state hunting license and a harvest ticket for each animal taken. Non-residents of Alaska must also possess the appropriate big game tag. Anglers require a sport fishing license. All areas of the island with roads are owned by the Aleut Corporation, and a special permit is required for all non-residents accessing this private property. No ATVs are permitted within the wildlife refuge and the Aleut Corporation only allows ATVs on the roads and trails, not on the tundra. Under Alaska state law, wastage is illegal.

Audubon enthusiasts generally do not consider Adak as exciting as Attu. That being said, the high winds are a blessing for birders; many vagrants from Asia and elsewhere can be spotted. Indigenous (but often rare) shore birds abound, and eagles are ubiquitous. Visitors not insistent upon scoring "First North America" sightings will find plenty of variety to enjoy. 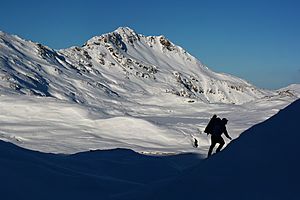 Developed trails are limited and most are not maintained. It is possible to hike on the tundra, but visitors are advised both to prepare for frequent weather changes and to never hike alone.

Nightlife and dining opportunities are few on Adak.

All content from Kiddle encyclopedia articles (including the article images and facts) can be freely used under Attribution-ShareAlike license, unless stated otherwise. Cite this article:
Adak, Alaska Facts for Kids. Kiddle Encyclopedia.