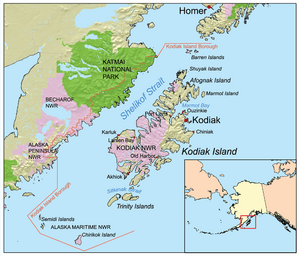 The Kodiak Archipelago (Russian: Кадьякский архипелаг ) is an archipelago (group of islands) south of the main land-mass of the state of Alaska (United States), about 405 km (252 mi) by air south-west of Anchorage in the Gulf of Alaska. The largest island in the archipelago is Kodiak Island, the second-largest island in the United States. The archipelago has a length of about 285 km (177 mi) and a width of about 108 km (67 mi), from the Barren Islands on the north to Chirikof Island and the Semidi Islands group on the south. The archipelago contains 13,890 km2 (5,360 sq mi) of land. The Kodiak Archipelago contains about 40 small glaciers, numerous streams and many species of land and marine animals. Much of its land is forested.

The Kodiak Island Borough includes all of the Kodiak Archipelago and some lands on the mainland. The Kodiak National Wildlife Refuge encompasses a large percentage of the land in the archipelago.

Islands in the Kodiak Archipelago

"The archaeological record contains several seemingly abrupt changes suggesting population replacements to some, but the current view, followed here, is that there has been long-term cultural continuity." (Ames et al., p. 61)

The Late Holocene contains four cultural periods: the Early Kachemak, the Late Kachemak, the Koniag, and the Alutiiq. Each period will be broken down by time period, also including the significance of each.

All content from Kiddle encyclopedia articles (including the article images and facts) can be freely used under Attribution-ShareAlike license, unless stated otherwise. Cite this article:
Kodiak Archipelago Facts for Kids. Kiddle Encyclopedia.