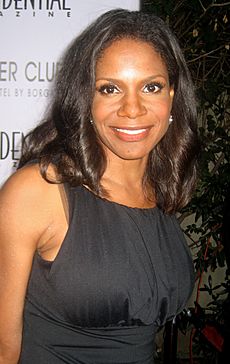 Audra McDonald (born July 3, 1970) is an American actress and singer.

She played Professor Carla Bonatelle in the television series The Bedford Diaries, Dr. Naomi Bennett in Private Practice, and Jackie Brock in Mister Sterling. She was nominated for Emmy Awards for playing Susie Monahan in the TV movie Wit and Ruth Younger in the TV movie A Raisin in the Sun. She won an Emmy in 2015 for her part as Lucy in Sweeney Todd: The Demon Barber of Fleet Street, a musical that was filmed for Live From Lincoln Center. She was also in the Live From Lincoln Center filmed musical Passion as Clara and played Grace Farrell in the TV movie Annie and Mother Abbess in The Sound of Music Live!. Her show Lady Day at Emerson's Bar and Grill.

On Broadway she played Ayah in The Secret Garden, Carrie Pipperidge in Carousel, Sharon Graham in Master Class, Sarah in Ragtime, Marie Christine L'Adrese in Marie Christine, Lady Percy in Henry IV, Ruth Younger in A Raisin in the Sun, Lizzie Curry in 110 in the Shade, Olivia in Twelfth Night, Bess in Porgy and Bess, Billie Holiday in Lady Day at Emerson's Bar and Grill, and Lottie Gee in Shuffle Along: Or the Making of the Musical Sensation of 1921 and All That Followed. She won Tony Awards for Carousel, Master Class, Ragtime, A Raisin in the Sun, Porgy and Bess, and Lady Day at Emerson's Bar and Grill, and was nominated for Marie Christine and 110 in the Shade. She was also nominated for a Grammy Award for Porgy and Bess.

She also performed in the Broadway concert Something Wonderful and played Deena Jones in the Actor's Fund concert of Dreamgirls. She played Jenny in Rise and Fall of the City of Mahoganny at the Los Angeles Opera, and won two Grammy Awards for the cast album.

McDonald has also been in movies. She played Maureen in Ricki and the Flash, Sally in Hello Again, and Garderobe in Beauty and the Beast.

She has her own concert DVD, Audra McDonald- Live at the Donmar London, and has done lots of shows at Carnegie Hall. She tours frequently. She also has five CDs- Way Back to Paradise, How Glory Goes, Happy Songs, Build a Bridge, and Go Back Home.

McDonald was born in Berlin, Germany to American parents. She was raised in Fresno, California.

All content from Kiddle encyclopedia articles (including the article images and facts) can be freely used under Attribution-ShareAlike license, unless stated otherwise. Cite this article:
Audra McDonald Facts for Kids. Kiddle Encyclopedia.