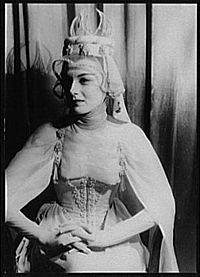 Seldes was born on August 23, 1928 in New York City, New York. She is of Russian-Jewish descent. Seldes studied at the Neighborhood Playhouse.

Seldes was married to Julian Claman from 1953 until they divorced in 1961. Her marriage to Julian was abusive. Seldes left the marriage after her father noticed marks on Seldes's face. Then she was married to Garson Kanin from 1990 until his death in 1999. She had one daughter with Julian, Katherine.

All content from Kiddle encyclopedia articles (including the article images and facts) can be freely used under Attribution-ShareAlike license, unless stated otherwise. Cite this article:
Marian Seldes Facts for Kids. Kiddle Encyclopedia.