The Greek Theatre at Syracuse. 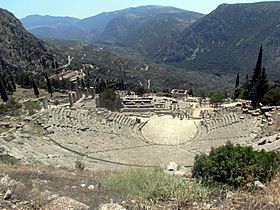 The Greek theatre at Delphi: in the most dramatic natural setting.

The Greek chorus was part of Ancient Greek theatre. It was a group of masked performers who looked alike, and spoke all at the same time. All the chorus wore identical masks, because they represented the same character or group of characters. Worn by the chorus, the masks created a sense of unity and uniformity, a kind of single organism.

The style was to comment on what was happening in the play, and help the audience know what a character was thinking. The chorus offered background information, summaries and comments. In many of these plays, the chorus told the audience what the main characters could not say, such as their hidden fears or secrets. Bear in mind that faces could not be seen, as performers wore masks, and the audience was at a distance. The chorus usually sang, or spoke. It made up for the fact that there were only one, two or three actors, who played several parts each (changing masks).

Before the introduction of several actors by Aeschylus, the Greek chorus was the main performer opposite a solitary actor. The importance of the chorus declined after the 5th century BC, when the chorus began to be separated from the dramatic action. Later dramatists depended less on the chorus.

The chorus originally consisted of fifty members. This was later reduced to twelve by Sophocles, then increased to fifteen members by Euripides in tragedies. There were twenty-four members in comedies, where the chorus sings, dances, narrates, and acts.p22p53 In Aeschylus' Agamemnon, the chorus are the elderly men of Argos, whereas in Euripides' The Bacchae, they are a group of female worshippers of the god Dionysus.p26 In Sophocles' Electra, the chorus presents the role of 'the women of Argos'. However, as with all Ancient Greek drama, the chorus were men, as were the actors and the audience.

Greek choruses sometimes had a leader known as the coryphaeus. He sometimes came first to introduce the chorus, and sometimes spoke for them if they were taking part in the action. The entrances and exits of the coryphaeus and his chorus served the same way curtains do in a modern theatre.

All content from Kiddle encyclopedia articles (including the article images and facts) can be freely used under Attribution-ShareAlike license, unless stated otherwise. Cite this article:
Greek chorus Facts for Kids. Kiddle Encyclopedia.