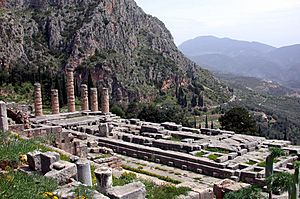 The Temple of Apollo at Delphi 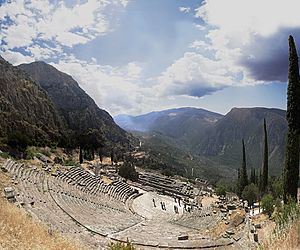 The Ancient Theatre of Delphi

Delphi is a town in Greece. It is a World Heritage Site. It has an archaeological site related to the Oracle of Delphi. The Pythian Games were held in Delphi. Among Delphi's art treasures is the Charioteer of Delphi.

All content from Kiddle encyclopedia articles (including the article images and facts) can be freely used under Attribution-ShareAlike license, unless stated otherwise. Cite this article:
Delphi, Greece Facts for Kids. Kiddle Encyclopedia.