Menander; Menandros; (c. 342/41 – c. 290 BC) was a Greek dramatist and the best-known representative of Athenian New Comedy. He wrote 108 comedies and took the prize at the Lenaia festival eight times. His record at the City Dionysia is unknown but may well have been similarly spectacular.

One of the most popular writers of antiquity, his work was lost during the Middle Ages and is known in modernity in highly fragmentary form, much of which was discovered in the 20th century. Only one play, Dyskolos, has survived almost entirely.

Loss of his work

Most of Menander's work did not survive the Middle Ages, except as short fragments. Federico da Montefeltro's library at Urbino reputedly had "tutte le opere", a complete works, but its existence has been questioned and there are no traces after Cesare Borgia's capture of the city and the transfer of the library to the Vatican.

Until the end of the 19th century, all that was known of Menander were fragments quoted by other authors and collected by Augustus Meineke (1855) and Theodor Kock, Comicorum Atticorum Fragmenta (1888). These consist of some 1650 verses or parts of verses, in addition to a considerable number of words quoted from Menander by ancient lexicographers. 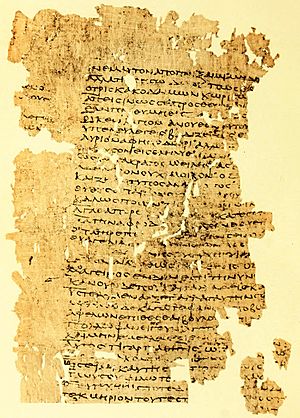 This situation changed abruptly in 1907, with the discovery of the Cairo Codex, which contained large parts of the Samia; the Perikeiromene; the Epitrepontes; a section of the Heros; and another fragment from an unidentified play. A fragment of 115 lines of the Sikyonioi had been found in the papier mache of a mummy case in 1906.

In 1959, the Bodmer papyrus was published containing Dyskolos, more of the Samia, and half of the Aspis. In the late 1960s, more of the Sikyonioi was found as filling for two more mummy cases; this proved to be drawn from the same manuscript as the discovery in 1906, which had clearly been thoroughly recycled.

Other papyrus fragments continue to be discovered and published. 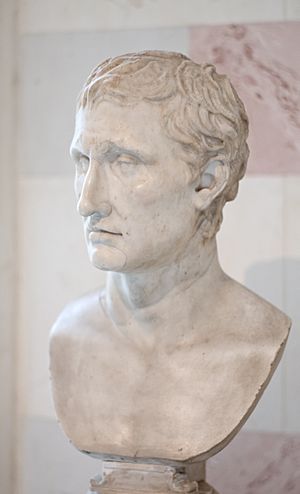 In 2003, a palimpsest manuscript, in Syriac writing of the 9th century, was found where the reused parchment comes from a very expensive 4th-century Greek manuscript of works by Menander. The surviving leaves contain parts of the Dyskolos and 200 lines of another, so far unidentified, piece by Menander.

"He who labors diligently need never despair, for all things are accomplished by diligence and labor." — Menander

All content from Kiddle encyclopedia articles (including the article images and facts) can be freely used under Attribution-ShareAlike license, unless stated otherwise. Cite this article:
Menander Facts for Kids. Kiddle Encyclopedia.