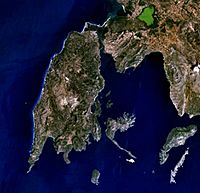 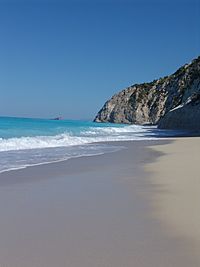 Every year many tourists visit Lefkada. Tourists come from western European countries, most from Italy. The most village on the island is Nidri which is in the east of the island. Opposite Nidri there are many small green islets. Among them is the islet Scorpios which belonged to millionaire Aristotle Onassis.

The German archaeologist Wilhelm Dörpfeld, believed that Lefkada was the real country of Odysseus. In Classic period, Lefkada was a colony of Corinth. Later it passed under the Roman rule and Byzantine rule. In medieval era many conquerors passed from the island. In the thirteenth century Venice took the island from Byzantium. The Venetians remained in island for many years. The Turks conquered the island for a brief period but the Venetians took the island back and held it until 1797. Then the Napoleon's France took the island and after the island passed in England. In 1864, the English gave Lefkada to Greece, along with the other Ionian islands.

All content from Kiddle encyclopedia articles (including the article images and facts) can be freely used under Attribution-ShareAlike license, unless stated otherwise. Cite this article:
Lefkada Facts for Kids. Kiddle Encyclopedia.