The capital of Cephalonia is Argostoli. Its area is 781 square meter and its population is 36,404 inhabitants according to 2001 Greek census.

The Island is named after Cephalus, but some think its name means 'an island with a head', because 'Cephalus' comes from the Greek word for 'head'. Most of the indigenous people of Cephalonia have surnames ending in "-atos", such as the Georgatos families, and almost every settlement on the island has a name ending in "-ata", such as Metaxata, Chavriata, Frangata, Lourdata, Favata, Delaportata and others. 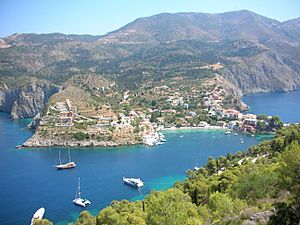 The capital of the Kefalonia is Argostoli. The size of the island is around 800 km² (300 sq miles). Argostoli is home to one-third of the island's habitants. Lixouri is the second major city. The two cities account for almost two-thirds of the prefecture's population.

The island is covered by dense vegetation and includes plenty of natural beauty including beaches, many of them inaccessible from land, and spectacular caves. Mirtos, the most famous of these beaches, is a major tourist attraction, and has ranked fifth worldwide for its scenic view. 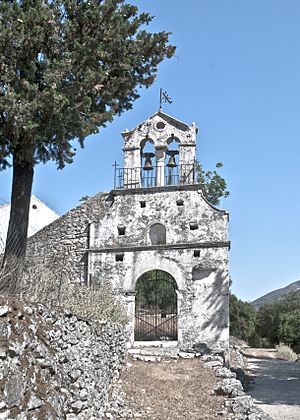 Its tallest mountain is Mount Ainos or Ainos with an elevation of 1628m. To the west-northwest is the Paliki mountains where Lixouri is located, other mountains include Gerania.

There are five harbours and ports and four main harbours on the island. Poros, in the south, has ferry routes to Kyllini. Argostoli, in the west, is the largest port, carrying local boats around, and ferries to Zante and occasionally to Lixouri. Vasiliki, in the north, has links to Lefkas and Ithaca. There is room for around 100 small boats in Argostoli, with the port stretching 1 kilometre around the estuary.

Kefalonia is located in the heart of an earthquake zone. Dozens of minor tremors occur each year. Almost every house was destroyed in the 1953 earthquake, with only regions in the north escaping heavy shaking. Damage was estimated in tens of millions of dollars, however the real damage to the economy occurred when residents left the island. 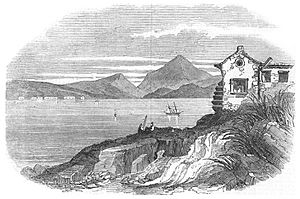 The sea mills at the bay of Argostoli were a natural curiosity in the 19th century. Mount Ainos can be seen in the background 1849

The first inhabitants of the island were Teloboes, or Taphioi as they were called by the Greeks when Cephalus founded the island and gave his name to the island, along with colonists from Attica. The towns and villages were mostly built high on the hilltops to prevent attacks from raiding parties of pirates that sailed the Ionian Sea during the 1800s.

In 1861, Kefalonia and the southern half of the Ionian Islands become a full part of the Kingdom of Greece, which later became a republic.

In World War II, the island was occupied by Axis powers. Until late 1943, the force was predominantly Italian, but some troops from Nazi Germany were also present. The island was largely spared from the fighting until Italy surrendered and Benito Mussolini was removed from power in September of that year. 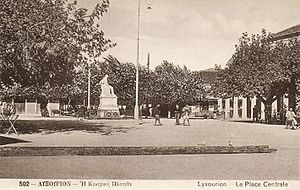 The central square of Lixouri 1910

As German reinforcements were headed to the island, the Italians dug in and eventually fought against the new German invasion. Ultimately, the German forces prevailed in taking full control of the island. Most of the remaining Italian forces were rounded up and executed.

While the war ended in central Europe in 1945, Kefalonia remained in conflict due to the Greek Civil War. Peace returned to Greece and the island in 1949.

Kefalonia became famous in the late 1990s thanks to the novel Captain Corelli's Mandolin, written by English author Louis de Bernières. The love story that is the theme of the book takes place during the events of the Second World War, and is based on historical facts. A film adaptation was released in 2000. 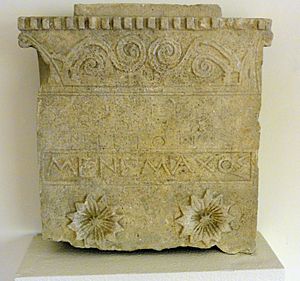 In summer many tourists visit Kefalonia, however as one of the largest islands in Greece, it is well equipped to handle them. Most tourists stay in or around Lassi, a serene resort a few kilometers from Argostoli. Off the North East coast is Ithaca, a island well known worldwide thanks to the Odyssey, an epic poem written by Homer.

The island is home to two large monasteries. One is Aghia Panagia in Markopoulo, and the other is on the road between Argostoli and Michata, on a small plain surrounded by mountains. This monastery has an avenue lined with about 200 trees. 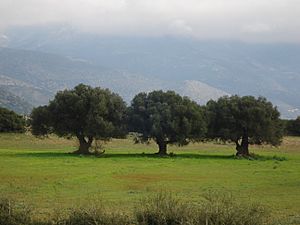 Olive trees in the Greek rural landscape of Kefalonia

The primary agricultural occupations are animal breeding and olive growing, with the remainder largely composed of grain and vegetables. Most vegetable production takes place on the plains, which cover less than 15% of the island, most of which is rugged and mountainous, suitable only for goats.

There are over one million olive trees on Cephalonia, covering almost 55% of the island's area. Olive oil is very important to the island's local, agricultural economy.

The island has a long winemaking tradition and is home to the dry, white lemony wines made from the Robola grape.

The majority of Kefallinians/Cephallenians lived in rural areas before the 1970s. Today, the urban population accounts for two-thirds of the area, while the other third remain in rural towns and villages close to farmland. 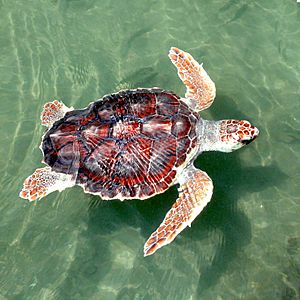 Most of the Ainos mountain range is designated as a National Park and is covered with the unique species of Greek fir and black pine (Pinus nigra).

Cephalonia is well known for its endangered Loggerhead turtle population, also known as the Caretta caretta turtle, which nests on many of the beaches along the south coast of the island. A small population of the endangered Mediterranean monk seal, also lives around the island's coast, especially on parts of the coast which are inaccessible to humans due to the terrain. Caves on these parts of the coast offer ideal locations for the seals to give birth to their pups and nurse them through the first months of their lives. Over 200 species of birds have been spotted on the island. 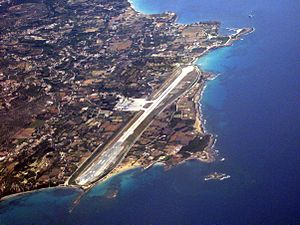 Stone roads and sidewalks were once common in Argostoli, and Lixouri. Gravel roads replaced stone roads in the late 20th century, with the first paved road created in the 1960s on two one-way main streets in Argostoli. Other roads were built in the 1970s and 1980s. In the 1990s the road network east of Argostoli to Michata and the monastery was opened. There is a now paved road, opened in 2002 east of Argostoli. There are approximately 2.5 km of one-way streets on the island.

The ferry between Argostoli and Lixouri goes every hour and every half-hour in the season. There are a few bus lines serving the more rural areas of Kefalonia, but often only two times a day.

There is one airport, Argostoli Airport, with a runway of around 1 km. Almost every scheduled flight is an Olympic plane. In summer the airport handles a lot of charter flights from all over Europe.

All content from Kiddle encyclopedia articles (including the article images and facts) can be freely used under Attribution-ShareAlike license, unless stated otherwise. Cite this article:
Kefalonia Facts for Kids. Kiddle Encyclopedia.