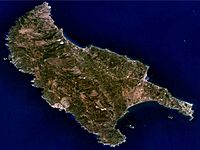 Zakynthos (or Zante) is a Greek island. It is the third largest island in the Ionian Sea. It is in the south Ionian Sea, west of the Peloponnese. Zakynthos' total population amounts to 41,472 inhabitants. The largest town of Zakynthos is Zakynthos city. Zakynthos is mostly flat island, with an area of 410 square kilometres.To the north of the island, there are low mountains and hills. 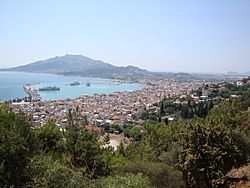 Zakynthos is a very touristic island. Most tourists who visit the island come from Western Europe, mainly Italy and England. The most popular part of island is the southern part. The island has many beautiful beaches, the most famous including the Navagio (shipwreck) and the beach of Laganas. The Mediterranean turtle lives in and around Zakynthos. It is also called careta careta. This species is very rare and it is a threatened species.

All content from Kiddle encyclopedia articles (including the article images and facts) can be freely used under Attribution-ShareAlike license, unless stated otherwise. Cite this article:
Zakynthos Facts for Kids. Kiddle Encyclopedia.