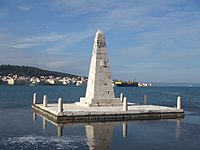 A monument in Argostoli

Argostoli is a coastal Greek town. It is in Kefalonia island whose is a capital. Also it is a capital of Kefalonia prefecture which is conclude and Ithaca island. According to the 2001 census, 12.589 people lived there. Argostoli has a port and it connects with Peloponnese port, Killini.

All content from Kiddle encyclopedia articles (including the article images and facts) can be freely used under Attribution-ShareAlike license, unless stated otherwise. Cite this article:
Argostoli Facts for Kids. Kiddle Encyclopedia.