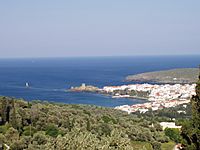 Andros is an island of Greece. It is the second biggest island of the Cyclades group. It is in the northwest of Cyclades group near Euboea island. Its total area is 380 square metres (4,100 sq ft). 10,009 people lived there according to the 2001 Greek census. The biggest town of Andros is Andros city.

Andros is mountainous island with gorges and cliffs which end up at the sea. The plants include many flowers, bushes and a few trees mainly in the center of island. The island has many beautiful beaches and beautiful landscape and thanks to these the island is popular for tourists.

All content from Kiddle encyclopedia articles (including the article images and facts) can be freely used under Attribution-ShareAlike license, unless stated otherwise. Cite this article:
Andros Facts for Kids. Kiddle Encyclopedia.