Joseph Jefferson Jackson (July 16, 1888 – December 5, 1951), nicknamed "Shoeless Joe", was an American outfielder who played Major League Baseball (MLB) in the early 1900s. He is remembered for his performance on the field and for his association with the Black Sox Scandal, in which members of the 1919 Chicago White Sox participated in a conspiracy to fix the World Series. As a result of Jackson's association with the scandal, Kenesaw Mountain Landis, Major League Baseball's first commissioner, banned Jackson from playing after the 1920 season despite his exceptional play in the 1919 World Series, in which he led both teams in several statistical categories and set a World Series record with 12 base hits. Since then, Jackson's guilt has been fiercely debated with new accounts claiming his innocence and urging Major League Baseball to reconsider his banishment. As a result of the scandal, Jackson's career was abruptly halted in his prime, ensuring him a place in baseball lore.

Jackson played for three Major League teams during his 12-year career. He spent 1908–1909 as a member of the Philadelphia Athletics and 1910 with the minor league New Orleans Pelicans before joining the Cleveland Naps at the end of the 1910 season. He remained in Cleveland through the first part of 1915; he played the remainder of the 1915 season through 1920 with the Chicago White Sox. Later in life, Jackson played ball under assumed names throughout the south.

Jackson, who played left field for most of his career, has the third-highest career batting average in major league history. In 1911, Jackson hit for a .408 average. It is still the sixth-highest single-season total since 1901, which marked the beginning of the modern era for the sport. His average that year also set the record for batting average in a single season by a rookie. Babe Ruth said that he modeled his hitting technique after Jackson's.

Jackson still holds the Indians and White Sox franchise records for triples in a season and career batting average. In 1999, he ranked number 35 on The Sporting News' list of the 100 Greatest Baseball Players and was nominated as a finalist for the Major League Baseball All-Century Team. The fans voted him as the 12th-best outfielder of all-time. He also ranks 33rd on the all-time list for non-pitchers according to the win shares formula developed by Bill James. 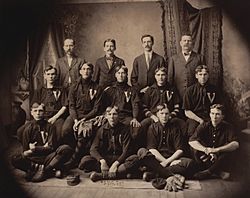 Jackson was born in Pickens County, South Carolina, the oldest son in the family. His father George was a sharecropper; he moved the family to Pelzer, South Carolina, while Jackson was still a baby. A few years later, the family moved to a company town called Brandon Mill on the outskirts of Greenville, South Carolina. An attack of measles almost killed him when he was 10. He was in bed for two months, paralyzed, while he was nursed back to health by his mother.

Starting at the age of 6 or 7, Jackson worked in one of the town's textile mills as a "linthead", a derogatory name for a mill hand. Family finances required Joe to take 12-hour shifts in the mill, and since education at the time was a luxury the Jackson family couldn't afford, Jackson was uneducated. His lack of education ultimately became an issue throughout Jackson's life. It even affected the value of his memorabilia in the collectibles market; because Jackson was illiterate, he often had his wife sign his signature. Consequently, anything actually autographed by Jackson himself brings a premium when sold, including one autograph which was sold for $23,500 in 1990 (equivalent to $38,000 in 2018). In restaurants, rather than ask someone to read the menu to him, he would wait until his teammates ordered and then order one of the items that he heard.

In 1900, when he was 13 years old, his mother was approached by one of the owners of the Brandon Mill and he started to play for the mill's baseball team. He was the youngest player on the team. He was paid $2.50 to play on Saturdays (equivalent to $64 in 2018). He was originally a pitcher, but one day he accidentally broke another player's arm with a fastball. No one wanted to bat against him so the manager of the team placed him in the outfield. His hitting ability made him a celebrity around town. Around that time he was given a baseball bat that he named Black Betsy. He was compared to Champ Osteen, another player from the mills who made it to the Majors. He moved from mill team to mill team in search of better pay, playing semi-professional baseball by 1905.

In an interview published in the October 1949 edition of Sport magazine, Jackson recalls he got his nickname during a mill game played in Greenville, South Carolina. Jackson had blisters on his foot from a new pair of cleats, which hurt so much that he took his shoes off before he was at bat. As play continued, a heckling fan noticed Jackson running to third base in his socks, and shouted "You shoeless son of a gun, you!" and the resulting nickname "Shoeless Joe" stuck with him throughout the remainder of his life.

In 1908, Jackson began his professional baseball career with the Greenville Spinners of the Carolina Association, married 15-year-old Katie Wynn, and eventually signed with Connie Mack to play for the Philadelphia Athletics. 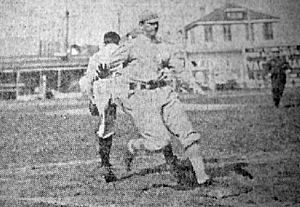 Jackson with the Pelicans

Playing for his hometown team, Jackson hit .346 to lead the 1908 Carolina Association, while also leading the league in hits and RBI. Jackson had a salary of $75.00 a month playing for the Greenville Spinners. In August, 1908, Jackson's contract was purchased by the Connie Mack of the Philadelphia Athletics for $900.00. Jackson immediately reported to the Athletics and made his major league debut.

For the first two years of his career, Jackson had some trouble adjusting to life with the Athletics; reports conflict as to whether he just did not like the big city, or if he was bothered by hazing from teammates. Consequently, he spent a great portion of that time in the minor leagues. Between 1908 and 1909, Jackson appeared in just 10 MLB games. During the 1909 season, Jackson played 118 games for the South Atlantic League's Savannah Indians. He batted .358 for the year. 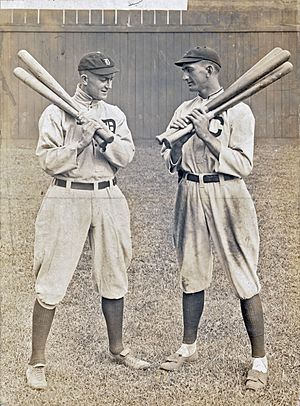 Ty Cobb and Joe Jackson in Cleveland in 1913

The Athletics gave up on Jackson in 1910 and traded him to the Cleveland Naps. He spent most of 1910 with the New Orleans Pelicans of the Southern Association, where he won the batting title and led the team to the pennant. Late in the season, he was called up to play on the big league team. He appeared in 20 games and hit .387.

In 1911, Jackson's first full MLB season, he set a number of rookie records. His .408 batting average that season is a record that still stands and was good for second overall in the league behind Ty Cobb. His .468 on-base percentage led the league. The following season, Jackson batted .395 and led the American League in hits, triples, and total bases. On April 20, 1912, Jackson scored the first run in Tiger Stadium. The next year, he led the league with 197 hits and a .551 slugging percentage.

In August 1915, Jackson was traded to the Chicago White Sox. Two years later, Jackson and the White Sox won the American League pennant and also the World Series. During the series, Jackson hit .307 as the White Sox defeated the New York Giants.

Jackson missed most of the 1918 season while working in a shipyard because of World War I. In 1919, he came back strongly to post a .351 average during the regular season and .375 with perfect fielding in the World Series. However, the heavily favored White Sox lost the series to the Cincinnati Reds. The next season, Jackson batted .382 and was leading the American League in triples when he was suspended, along with seven other members of the White Sox, after allegations surfaced that the team had thrown the previous World Series. 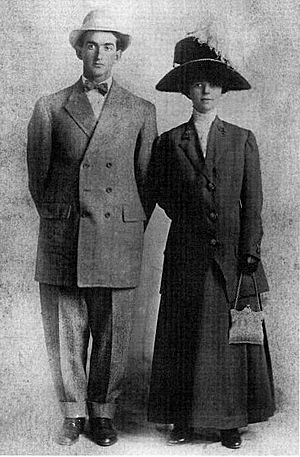 Jackson and his wife Katie on their wedding day in 1908

During the remaining 20 years of his baseball career, Jackson played with and managed a number of semi-professional teams, most located in Georgia and South Carolina. In 1922, Jackson moved to Savannah, Georgia, and opened a dry cleaning business with his wife.

In 1933, the Jacksons moved back to Greenville, South Carolina. After first opening a barbecue restaurant, Jackson and his wife opened "Joe Jackson's Liquor Store", which they operated until his death. One of the better known stories of Jackson's post-major league life took place at his liquor store. Ty Cobb and sportswriter Grantland Rice entered the store, with Jackson showing no sign of recognition towards Cobb. After making his purchase, Cobb finally asked Jackson, "Don't you know me, Joe?" Jackson replied, "Sure, I know you, Ty, but I wasn't sure you wanted to know me. A lot of them don't."

As he aged, Jackson began to suffer from heart trouble. In 1951, at the age of 64, Jackson died of a heart attack. He was the first of the eight banned players to die, and is buried at Woodlawn Memorial Park in Greenville. He had no children, but he and his wife raised two of his nephews.

Though Jackson was banned from Major League Baseball, statues and parks have been constructed in his honor. One of the landmarks built for him was a memorial park in Greenville, Shoeless Joe Jackson Memorial Park. A life-size statue of Jackson, created by South Carolina sculptor Doug Young, also stands in Greenville's West End.

In 2006, Jackson's original home was moved to a location adjacent to Fluor Field in downtown Greenville. The home was restored and opened in 2008 as the Shoeless Joe Jackson Museum. The address is 356 Field Street, in honor of his lifetime batting average. The restoration and move was chronicled on TLC's reality show The Real Deal episode "A Home Run for Trademark" which aired March 31, 2007. Richard C. Davis, the owner of Trademark Properties, hired Josh Hamilton as the construction foreman.

Jackson was inducted into the Baseball Reliquary's Shrine of the Eternals in 2002.

Jackson's first relative to play professional baseball since his banishment was catcher Joseph Ray Jackson. The great-great-grand nephew of Shoeless Joe batted .386 for The Citadel in 2013 and was then drafted by the Texas Rangers. Later that year, he made his professional debut with the Northwest League's Spokane Indians.

Shoeless Joe was depicted in a few films in the late 20th century. Eight Men Out, a film directed by John Sayles, based on the Eliot Asinof book of the same name, details the Black Sox Scandal in general and has D. B. Sweeney portraying Jackson.

The Phil Alden Robinson film Field of Dreams, based on Shoeless Joe by W. P. Kinsella, stars Ray Liotta as Jackson. Kevin Costner plays an Iowa farmer who hears a mysterious voice instructing him to build a baseball field on his farm so Shoeless Joe—among others—can play baseball again.

All content from Kiddle encyclopedia articles (including the article images and facts) can be freely used under Attribution-ShareAlike license, unless stated otherwise. Cite this article:
Shoeless Joe Jackson Facts for Kids. Kiddle Encyclopedia.