Kids Encyclopedia Facts
This page is about the baseball bat. For the town, see Black Betsy, West Virginia. 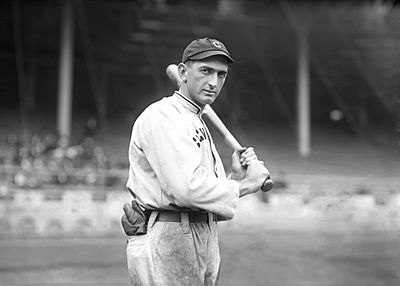 Shoeless Joe Jackson, Black Betsy in hand, during his 1913 season with the Cleveland Naps.

Black Betsy was the primary baseball bat of Shoeless Joe Jackson. It was created in 1903 when Jackson was 15. It broke the record for the highest sold baseball bat in history, when it was sold for $577,610 in 2001. By then it was considered one of baseball's most fabled artifacts. The record was broken in 2004 when a 1923 Babe Ruth bat sold for $1.2 million.

The bat was manufactured by a local fan of the South Carolina mill teams, Charlie Ferguson. He used the northern side of a hickory tree to make the bat. It ended up measuring 36 inches (91 cm) and weighing 48 ounces (1.4 kg). Knowing that Jackson liked blacked bats, Fergerson darkened the bat with tobacco juice. Jackson took the bat to the minor leagues, where the fans often chanted "Give 'em Black Betsy" when Jackson came to bat.

Jackson took the bat with him when he was sold to the Philadelphia Athletics of the American League. Black Betsy was his favorite bat. It broke in early 1911, and Jackson sent it to major-league bat manufacturer J. F. Hillerich Company to get it fixed. He used the bat for the rest of his major league career.

Sporting goods companies Spalding and Hillerich & Bradsby both produced reproductions of the bat for sale to fans, starting in the 1910s.

The National Pastime Museum, a virtual museum opened in 2013, included a bat described as "the rarest type of 'Black Betsy,' one that once launched many a line drive from 'Shoeless' Joe Jackson". The museum sold the bat at a Christie's auction in October 2016 for $583,500. The Christie's catalog called it a 1917–21 era Hillerich & Bradsby model, "one of two known professional model Joe Jackson bats, and the only full name script Signature model manufactured by Louisville Slugger that can be attributed to being used by Jackson.". In its report on the sale, Associated Press said, "Shoeless Joe's 'Black Betsy' bat is one of two known to survive from his career, and the only one with his full signature in script stamped into the barrel." Lester Erwin responded that 'Black Betsy' was the one he had sold in 2001, not the one sold in 2016.

All content from Kiddle encyclopedia articles (including the article images and facts) can be freely used under Attribution-ShareAlike license, unless stated otherwise. Cite this article:
Black Betsy Facts for Kids. Kiddle Encyclopedia.