Comiskey Park was a ballpark located in the Bridgeport community on the near-southwest side of Chicago. Most notably, the stadium served as the home of the Chicago White Sox of Major League Baseball from 1910 through 1990. Built by White Sox owner Charles Comiskey and designed by Zachary Taylor Davis, Comiskey Park hosted four World Series and more than 6,000 Major League Baseball games. Also, in one of the most famous boxing matches in history, the field was the site of the 1937 heavyweight title match in which Joe Louis defeated then champion James J. Braddock in eight rounds that launched Louis' unprecedented 11-plus year run as the heavyweight champion of the world.

The Chicago Cardinals of the National Football League also called Comiskey Park home when they weren't playing at Normal Park or Soldier Field. The Cardinals won the 1947 NFL Championship Game over the Philadelphia Eagles at Comiskey Park.

A new ballpark opened in 1991, across 35th Street and south of its predecessor, and Comiskey Park was demolished the same year. Originally also called Comiskey Park, it was renamed U.S. Cellular Field in 2003 and Guaranteed Rate Field in 2016. 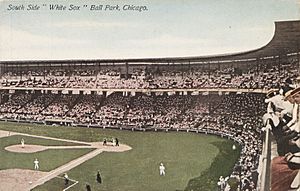 White Sox Park in its early days. The "South Side" label refers to the White Sox themselves, not the stadium

The park was built on a former city dump that Comiskey bought in 1909 to replace the wooden South Side Park. It was originally built as White Sox Park, but within three years was renamed for White Sox founder and owner Charles Comiskey. The original name, White Sox Park, was restored in 1962, but it went back to the Comiskey Park name in 1976.

Comiskey Park was very modern for its time. It was the third concrete-and-steel stadium in the major leagues to be built since 1909. As originally built, it seated almost 32,000, a record at the time. Briefly, it retained the nickname "The Baseball Palace of the World."

In 1969, AstroTurf was installed in the infield and the adjacent foul territory, with the outfield and adjoining foul territory remaining as natural grass. It was the first outdoor field in the major leagues to install artificial turf. After seven seasons, the artificial turf was removed prior to the 1976 season.

During the last 8 years of its existence, Comiskey's annual attendance surpassed the 2 million mark three times.

Comiskey Park was demolished in 1991, a process that started from behind the right field corner, and took all summer. The last portion to come down was the center field bleachers and the "exploding" scoreboard. The site of the old park was turned into a parking lot to serve those attending games at the new Comiskey Park (later renamed Guaranteed Rate Field). 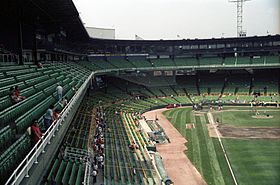 At the time Comiskey was demolished, Chicago's two baseball stadiums were a combined 157 years old.

Bill Veeck once remarked that "There is no more beautiful sight in the world than a ballpark full of people!" On its best days, Comiskey was stuffed to the gills, with 55,000 people or more lining the aisles and even standing for 9 (or 18) innings on the sloping ramps that criss-crossed behind the scoreboard. The nearly-fully enclosed stands had a way of capturing and reverberating the noise without any artificial enhancement. As a Chicago sportswriter once remarked, "Wrigley Field yayed and Comiskey Park roared."

All content from Kiddle encyclopedia articles (including the article images and facts) can be freely used under Attribution-ShareAlike license, unless stated otherwise. Cite this article:
Comiskey Park Facts for Kids. Kiddle Encyclopedia.