Sha Na Na is an American rock and roll doo-wop group. Performing a song-and-dance repertoire based on 1950s hit songs, Sha Na Na has been simultaneously reviving and parodying the music of 1950s New York street culture since the group's formation in 1969. After gaining initial fame for their performance at Woodstock, made possible with the help of their friend Jimi Hendrix, the group hosted Sha Na Na, a syndicated variety series that ran from 1977 to 1981.

Billing themselves as "from the streets of New York", members were frequently outfitted in gold lamé or leather jackets, and sporting pompadour or ducktail hairdos. The group's name is taken from a series of nonsense syllables ("Sha Na Na Na Sha Na Na Na Na") in the song "Get a Job", originally recorded by the Silhouettes.

Sha Na Na hosted the Sha Na Na syndicated variety series that ran from 1977 to 1981. It was among the most watched programs in syndication during its run. The show was produced by Pierre Cossette and originally distributed by LBS Communications.

The show featured the group performing hits from the 1950s and 1960s, along with comedy skits. The "tough guys" road act from their original road shows was adapted for TV and the group moved to a comedy and self-deprecating routine. The mainstay continued to be the 1950s song and dance routines. The show opened in a typical concert scene, and then moved through various street and ice cream parlor scenes where they and their guests performed several songs. That was followed by a comedy-oriented song ("Alley Oop", "Hello Muddah, Hello Faddah") and closed with a slow song, again in their concert format.

Among the supporting members featured in the series were Avery Schreiber, Kenneth Mars and Philip Roth (all of them in the first season); both Pamela Myers and actress Jane Dulo (the crabby Lady in the Window, who watched over the street scenes from her apartment with undisguised disdain) throughout the show's run, June Gable and Soupy Sales (seasons 2 to 4); Michael Sklar (season 2); and Karen Hartman (season 4).

The members of Sha Na Na during the TV series were Jon "Bowzer" Bauman (vocals), Lennie Baker (sax/vocals), Johnny Contardo (vocals), Frederick "Dennis" Greene (vocals), Danny "Dirty Dan" McBride (guitar/vocals) (left after third season), Jocko Marcellino (drums/vocals), Dave "Chico" Ryan (bass/vocals), 'Screamin' Scott Simon (piano/vocals), Scott "Santini" Powell (vocals), Donald "Donny" York (vocals). Every member was featured with a solo vocal spot during the course of the series. Each was introduced only by his nickname or his first name in a voice-over by Myers at the beginning of each show.

The group appear as themselves in the documentaries Woodstock (1970) and Festival Express (2003).

Sha Na Na also appeared in the 1978 film Grease (an adaptation of the 1971 Broadway musical of the same name) as a 1950s band called Johnny Casino and the Gamblers. Their tracks on the film and Grease soundtrack include two songs from the original 1971 musical: "Those Magic Changes" and "Born to Hand Jive"; as well as four songs from the early rock and roll era: versions of Elvis Presley's covers of "Hound Dog" (1956) and "Blue Moon" (1956), a cover of the Imperials' "Tears on My Pillow" (1958), and a cover of Danny & the Juniors' "Rock & Roll Is Here to Stay" (1958). The song "Sandy" sung by John Travolta in the film, was co-written specifically for the film by Sha Na Na's Screamin' Scott Simon. 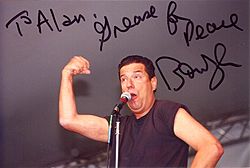 Bass player Dave "Chico" Ryan died in 1998. While remaining in Sha Na Na, he joined Bill Haley & His Comets for the group's fall 1979 tour of Europe (Haley's last major tour before his death).

Bass guitarist Reggie Battise was a dancer in the feature film Staying Alive (1983) and White Men Can't Jump (1992) as well as the TV series Moonlighting. He succumbed to prostate cancer on October 8, 2010.

Founding member Robert Leonard is a professor of linguistics at Hofstra University. He had an appearance as a qualified expert in linguistics for the murder case of Charlene Hummert in the episode "A Tight Leash" of the TV medical detectives series Forensic Files in 2004, as well as for the Tennessee "Facebook Murders" on the Investigation Discovery crime show Too Pretty to Live in 2016.

Alan Cooper, the lead singer in the group's performance of "At the Hop" in the Woodstock film, went on to pursue an academic career. He taught religious studies at McMaster University in Hamilton, Ontario, for ten years, then became a professor of Bible studies at Hebrew Union College-Jewish Institute of Religion in Cincinnati, and now serves as the Elaine Ravich Professor of Jewish Studies and provost at the Jewish Theological Seminary of America.

Jon "Bowzer" Bauman replaced Alan Cooper and became a recognizable member of the group as he taunted audiences while he flexed his muscles, burped and spat in the direction of the bass player. In the 1980s he had a brief career as a game show master of ceremonies. He continues to tour.

Joe Witkin, who was replaced by "Screamin'" Scott Simon, was the original keyboard player and singer of "Teenager in Love" on their first album. Witkin left the band in 1970 to finish medical school, and subsequently moved to San Diego, California, in 1975 to do his internship and residency at the University of California in San Diego. He worked at Scripps Hospital East County from 1978 to 2000 as an ER physician, and held the same position at Sharp Grossmont Hospital in La Mesa until retiring in 2013. Witkin lives with his family in San Diego, California. He played with a 1950s/1960s show band The Corvettes in San Diego for 23 years.

Scott Powell is a specialist in orthopedic surgery and sports medicine. He performed on the TV show under the stage name "Santini" (another alias was "Captain Outrageous"). Powell left the band in 1980 and returned to Columbia to take pre-medical courses. He is a member of the medical staff of US national soccer teams, and is the team physician for the Federation Women's National Team and an associate clinical professor at University of Southern California. While Powell was with Sha Na Na, he sang the bulk of the Elvis Presley revival songs.

Frederick "Denny" Greene left the group to pursue studies in law. After graduating from Yale Law School, he became the vice president of production and features at Columbia Pictures. He was a professor at the University of Dayton. Greene was known for his skilled dancing and sang the lead in "Tears on My Pillow", "Duke of Earl", and others. He died on September 5, 2015 after a brief illness.

All content from Kiddle encyclopedia articles (including the article images and facts) can be freely used under Attribution-ShareAlike license, unless stated otherwise. Cite this article:
Sha Na Na Facts for Kids. Kiddle Encyclopedia.