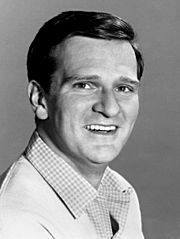 Kenneth Mars or Ken Mars (April 4, 1935 – February 12, 2011) was an American movie, television, stage, and voice actor. He was known for his roles in Young Frankenstein, The Little Mermaid, The Producers, and as Otto Mannkusser in Malcolm in the Middle.

Mars was born on April 4, 1935 in Chicago, Illinois. He studied at Northwestern University. He was married to Barbara Newborn from 1977 until his death in 2011. They had two children. Mars died on February 13, 2011 in Granada Hills, Los Angeles, California from pancreatic cancer, aged 75.

All content from Kiddle encyclopedia articles (including the article images and facts) can be freely used under Attribution-ShareAlike license, unless stated otherwise. Cite this article:
Kenneth Mars Facts for Kids. Kiddle Encyclopedia.