Kids Encyclopedia Facts
This page is about the animated series. For other uses, see Freakazoid (disambiguation).

Freakazoid! is an American superhero animated television series created by Bruce Timm and Paul Dini and developed by Tom Ruegger for the Kids' WB programming block of The WB. The series chronicles the adventures of the title character, Freakazoid, a crazy superhero who battles with an array of supervillains. The show also features mini-episodes of adventures of other bizarre superheroes. The show was produced by Amblin Entertainment and Warner Bros. Animation. The cartoon was the third animated series produced by the collaboration of Steven Spielberg and Warner Bros. Animation during the animation renaissance of the 1990s.

Bruce Timm, best known as a major principal of the DC animated universe, originally intended it to be a straightforward superhero action-adventure cartoon with comic overtones, but executive producer Steven Spielberg asked series producer and writer Tom Ruegger and the Animaniacs team to turn Freakazoid! into a flat-out comedy. The show is similar to fellow Ruegger-led programs such as Animaniacs, and the humor is unique in its inclusions of slapstick, fourth wall firings, parody, surreal humor and pop cultural references.

The series was one of the first to debut on the new Kids' WB Saturday morning block of The WB, on September 9, 1995. The series lasted for two seasons, finishing with 24 episodes, the final one broadcast on June 1, 1997. Although the series originally struggled in the ratings, reruns on Cartoon Network and a fan following have elevated the series to become a cult hit. Warner Bros. even flirted with the idea of renewing the series for a third season, but deemed it to be too expensive. The show also ranked #53 on IGN's Top 100 Animated Series list.

The show's title character is the superhero alter ego of geeky 16-year-old (later changed to 17-year-old) Dexter Douglas who attends Harry Connick High School. His name is an allusion to various superheroes' alliterative names (e.g. Bruce Banner, Peter Parker). Dexter gained his abilities from a computer bug activated by a "secret key sequence" that must be typed (a reference to the Pentium FDIV bug). The sequence of keys is "@[=g3,8d]\&fbb=-q]/hk%fg" (the quotes are included), as seen when Roddy MacStew types the combination in "The Chip (Act 2)". The bug manifests when the user presses Delete after entering the string, and was first activated when Dexter's cat crawled onto the keyboard. Becoming absorbed into his computer and instantly gaining all the information on the Internet, Freakazoid has enhanced strength and endurance, extraordinary speed and agility and negligible amounts of sanity. These changes make him a powerful and fearsome force for upholding freedom and righteousness, unless he gets distracted by something like a bear riding a motorcycle. He has a base called the Freakalair, a parody of the Batcave, built by his mute butler, Ingmar. The Freakalair contains a "Hall of Nifty Things to Know" and even a mad scientist lab. His greatest weakness, as he once explained to Armando Guitierrez, is that he can be imprisoned in a cage with graphite bars charged with negative ions. He also expresses a great aversion to "poo gas".

Peripheral powers come and go: Freakazoid once developed telekinesis triggered by anger that was never mentioned again after the episode, and once crossed the globe to yell at a Tibetan monk for raking too loudly, but apologizes to him later in the same plot. He also has the ability to assume the form of electricity and cover long distances instantaneously, although he just as often simply sticks his arms forward and runs while making swooshing sounds with his mouth, pretending to fly.

Dexter can change into and out of Freakazoid at will with the words "Freak out!" and "Freak in!". When not in Freakazoid mode, Dexter looks and acts completely normal, and his family is unaware that anything has happened to him. Freakazoid spends this time in an area of Dexter's brain called the Freakazone, where he reflects, has profound thoughts, and watches reruns of The Rat Patrol.

While the show's setting is set around Washington, D.C., the locale often varies with the show's humor, taking Freakazoid to locations around the world as needed.

Freakazoid! features a number of campy villains, including:

A few characters fall somewhere in the space between "allies" and "enemies" to land squarely in the category of "nuisances". 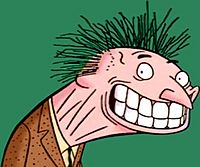 The elusive Emmitt Nervend, who is often only seen briefly between frames of animation on the show

Freakazoid! also features several mini-segments, primarily during the first season. Each of these have their own theme songs, title cards and cast, and only rarely "cross over" into the continuity of the main show. These segments include:

The humor in Freakazoid! relied heavily on slapstick, parody and pop cultural references. Due to the series being metafiction, much of the series was self-aware humor (i.e. breaking the fourth wall); for instance, after the first appearance of the Freakmobile, the show goes immediately into an impromptu commercial for a toy version, and later in the episode, Freakazoid addresses an audience, congratulating the staff on how hard they have worked to make the show toyetic. A typically strange running gag involves a repeated credit for "Weena Mercator as the Hopping Woman", though no such character appears in any episode. Her credit is usually preceded by a number of other fictional names and followed by a fictional director. The show also incorporated humor aimed at the then-newly founded WB Network, such as questioning the meaning of the initials "WB", e.g., "Weird Butt" or "Wet Bananas" instead of Warner Bros.

Freakazoid! made frequent use of stock footage, including the peaceful scene of a field of flowers ("Relax-O-Vision"), numerous people screaming ("Scream-O-Vision"), traditionally dressed Bavarians dancing and slapping each other, a man being shot in the belly with a cannonball and a man wrestling a bear.

Cameo appearances were also a major element of the show's humor. At various times, Freakazoid! hosted appearances by characters from other Warner Bros. Cartoons such as Pinky and the Brain, Animaniacs and even an insinuation appearance of the Batman from Bruce Timm's animated version, which has a similar drawing style (its concept of old movie-style title cards at the beginning of each episode was also replicated in Freakazoid!). Portrayals of many celebrities (including producer Steven Spielberg) and guest appearances by such figures as Jack Valenti, Leonard Maltin and Mark Hamill as themselves were also commonplace. Norm Abram had an entire episode, "Normadeus", built around him. One original character, a bizarre-looking man named Emmitt Nervend, plays no role whatsoever other than enabling a Where's Waldo-esque hunt for his constant cameos (complete with the number of his appearances announced in the closing credits).

One of the show's longest cameo appearances was when Wakko (from Animaniacs) and the Brain (from Pinky and the Brain) appeared in a scene in which they argue with Freakazoid over which of their shows is Steven Spielberg's favorite, with Freakazoid arguing that his show was the favorite because "we got a memo" (Tiny Toon Adventures was not represented in the discussion as it was on Nickelodeon at the time, while the others were on Kids' WB). However, when the trio confronts Steven over the issue, he simply replies: "Who are you people?".

The sixth season episode of Teen Titans Go!, "Huggbees", aired on November 14, 2020 and features Freakazoid helping the Teen Titans defeat the Lobe and the Brain when they join forces. It was mentioned by Freakazoid that Steven Spielberg would have to approve the crossover which led to Robin sending a message to Steven who approves of the crossover. According to Rugg, the production team for the show had sent him a script involving Freakazoid in December 2019 which he approved. The episode includes voice work from original VAs on Freakazoid! including Rugg, David Warner, Ed Asner, and Joe Leahy.

All content from Kiddle encyclopedia articles (including the article images and facts) can be freely used under Attribution-ShareAlike license, unless stated otherwise. Cite this article:
Freakazoid! Facts for Kids. Kiddle Encyclopedia.