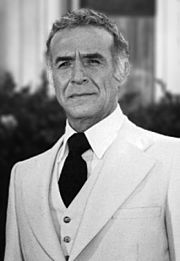 During the mid-1970s, Montalbán was the spokesman in tv automobile advertisements for the Chrysler Cordoba, in which he praised the "soft Corinthian leather" used for its interior. He also advertised the Chrysler New Yorker.

From 1977 to 1984, he was famous as Mr. Roarke the main star in the television series Fantasy Island. He played Khan Noonien Singh in the 1967 episode "Space Seed" of the first season of the original Star Trek series, and the 1982 film Star Trek II: The Wrath of Khan.

He won an Emmy Award in 1978 for his role in the miniseries How the West Was Won and a Lifetime Achievement Award from the Screen Actors Guild in 1993. Into his 80s, he continued to perform, often providing voices for animated films and commercials, and appearing in several Spy Kids films as "Grandfather Valentin".

Montalbán was born in Mexico City, Mexico on November 25, 1920. He grew up in the city of Torreón, the son of Spanish immigrants Ricarda Merino and Jenaro Montalbán, a store manager. He was married to Georgiana Belzer from 1944 until her death in 2007. They had four children.

All content from Kiddle encyclopedia articles (including the article images and facts) can be freely used under Attribution-ShareAlike license, unless stated otherwise. Cite this article:
Ricardo Montalbán Facts for Kids. Kiddle Encyclopedia.