Khan Noonien Singh, commonly shortened to Khan, is a fictional character in the Star Trek science fiction franchise. The character first appeared in the Star Trek: The Original Series episode "Space Seed" (1967), and was portrayed by Ricardo Montalbán, who reprised his role in the 1982 film Star Trek II: The Wrath of Khan. In the 2013 film Star Trek Into Darkness, he is played by Benedict Cumberbatch.

The character once controlled more than a quarter of the Earth during the Eugenics Wars of the 1990s. After being revived from suspended animation in 2267 by the crew of the Starship Enterprise, Khan attempts to capture the starship, but is thwarted by James T. Kirk and exiled on Ceti Alpha V to create a new society with his people. In Star Trek II: The Wrath of Khan, set fifteen years after "Space Seed", Khan escapes his exile and sets out to exact revenge upon Kirk.

In Star Trek Into Darkness, set in the alternate continuity established in Star Trek (2009), Khan is awakened almost a decade before the events of "Space Seed". Khan is given the false identity "John Harrison" and coerced by Admiral Marcus into building weapons for Starfleet in exchange for the lives of Khan's crew. He ultimately rebels and comes into conflict with the crew of Enterprise.

Khan has been depicted in various novels and comic book publications. 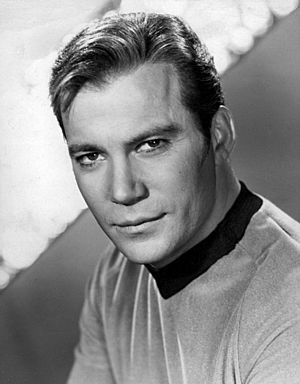 Khan makes his introductory appearance in the episode "Space Seed", first broadcast on February 16, 1967. According to the backstory revealed in the episode, Khan is one of a group of genetically engineered superhumans, bred to be free of the usual human mental and physical limitations, who were removed from power after the Eugenics Wars of the 1990s. Khan had been both the most successful conqueror and the most benign ruler of the group, ruling more than a quarter of the Earth's area across Asia to the Middle East from 1992 to 1996 with a firm but generally peaceful hand.

While most of the supermen were killed or sentenced to death, Khan and 84 others escaped Earth by way of the sleeper ship SS Botany Bay. Botany Bay is discovered by the crew of the Starship Enterprise in 2267, with Khan and 72 of the 84 crew members of Botany Bay still alive, cryogenically frozen in suspended animation.

When Khan's sleep chamber malfunctions, he is transported to Enterprise, where he reawakens and learns he is in the 23rd century. Given spacious quarters while Botany Bay is towed to a starbase, Khan charms the ship's historian, Marla McGivers (Madlyn Rhue), while using his access to the ship's technical manuals to learn how to take over and operate Enterprise. McGivers agrees to help Khan revive the other supermen, allowing him to organize an attempted takeover.

To force the Enterprise crew to cooperate with him, Khan places Captain James T. Kirk (William Shatner) in the ship's decompression chamber and threatens to kill Kirk unless the crew submits. McGivers cannot stand by as her Captain dies and frees Kirk, who neutralizes Khan's men by using a neural gas. Khan heads to engineering and sets the ship's engines to self-destruct, whereupon he is stopped by Kirk. Captain Kirk conducts a hearing, sentencing Khan and his followers to exile on an uncolonized world, Ceti Alpha V.

Khan returns in the 1982 feature film Star Trek II: The Wrath of Khan. Captain Clark Terrell (Paul Winfield) and First Officer Pavel Chekov (Walter Koenig) of USS Reliant are searching for an uninhabited world to test the Genesis device, a powerful terraforming tool. They beam down to what they believe is Ceti Alpha VI.

Khan's followers capture Terrell and Chekov, and Khan explains that the barren world is Ceti Alpha V; the sixth planet of the system exploded shortly after Khan and his followers were marooned. Only twenty of Khan's followers survive. Swearing vengeance on Kirk, Khan implants Ceti eels in Terrell and Chekov's brains, rendering them vulnerable to suggestion. Khan then seizes control of Reliant, intent on capturing the Genesis device.

Enterprise defeats Reliant and Khan is fatally wounded. Refusing to accept defeat, Khan activates the Genesis device, intent on killing his foe along with himself, the Enterprise eventually escapes.

Khan appears in the 2013 film Star Trek Into Darkness. While the character’s backstory remains the same, Khan is revived by Starfleet Admiral Alexander Marcus rather than the crew of Enterprise. Marcus anticipates a war with the Klingons, and forces Khan to develop warships and weapons for Starfleet under the cover identity of "Commander John Harrison", holding Khan's shipmates hostage. These developments include advanced long-range torpedoes and the warship USS Vengeance.

The Wrath of Khan

The Wrath of Khan

Ricardo Montalbán said in promotional interviews for the film he realized early on in his career that a good villain does not see himself as villainous. The villain may do villainous things, but he feels that he is doing them for righteous reasons. Montalbán further stated he always tried to find a flaw in the character, as no one is completely good or completely evil; while Khan had a rather distorted view of reality and therefore performed acts of evil, he still felt that his vengeance was a noble cause because of the death of his wife. Khan quotes the character of Ahab from Moby-Dick throughout the film, always wanting to make Kirk pay for the wrongs he has inflicted upon him.

All content from Kiddle encyclopedia articles (including the article images and facts) can be freely used under Attribution-ShareAlike license, unless stated otherwise. Cite this article:
Khan Noonien Singh Facts for Kids. Kiddle Encyclopedia.