Pinky, Elmyra & the Brain is the retooling of the American animated television series Pinky and the Brain (itself being a spin-off from Animaniacs), with the title characters being joined by Elmyra Duff from Tiny Toon Adventures. The show was executive produced by Steven Spielberg and the series was produced by Amblin Entertainment in association with Warner Bros. Animation, and aired from 1998 to 1999 on Kids' WB, running for 13 episodes. It was Spielberg's last collaborative effort with Warner Bros. Animation until the 2020 Animaniacs revival.

The series starts with ACME Labs destroyed (it would then be converted into a Dissy Store), leaving Pinky (Rob Paulsen) and the Brain (Maurice LaMarche) homeless and on the run from a man named Wally Faust. Pinky and the Brain finally end up in a pet store and take refuge inside a turtle; they are still inside the turtle when it is purchased by Elmyra Duff (Cree Summer) and named Mr. Shellbutt. In their new home, Pinky and the Brain continue to attempt new methods of trying to take over the world while at the same time enduring Elmyra's affection.

Pinky, Elmyra & the Brain won an Annie Award in 1999, for "Outstanding Individual Achievement for Voice Acting in an Animated Television Production." Both Rob Paulsen for his voicing of Pinky and Cree Summer for her voicing of Elmyra were nominated in the category, with Paulsen winning the award. That same year Pinky, Elmyra & the Brain was nominated for another Annie Award, "Outstanding Individual Achievement for Directing in an Animated Television Production," as well as winning a Daytime Emmy Award in 2000, for "Outstanding Children's Animated Program." 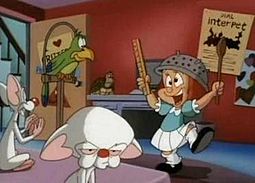 Screen shot from the opening title sequence. From left to right: Pinky, the Brain, and Elmyra.

Many Pinky, Elmyra & the Brain episodes had been split into two parts and aired at different times. The split sections of these episodes were 10 to 11 minutes long, versus the standard 22 minutes for most animated cartoon series.

Carl's Jr. and Hardee's offered a collection of four Pinky, Elmyra and Brain toys with their kids' meals.

Less than halfway through the series' run, Pinky, Elmyra and Brain began airing on The Cat&Birdy Warneroonie PinkyBrainy Big Cartoonie Show, in which one episode segment was shown at a time, rather than complete episodes. The exception to this airing change was episode 10, which was shown completely intact on its respective air date.