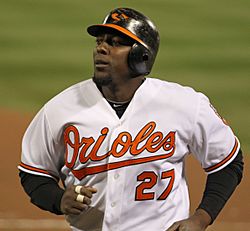 Guerrero with the Baltimore Orioles in 2011.

Guerrero is considered one of the greatest batters of all time, and is widely regarded as the best "bad ball" batter of all time (the ability to hit pitches outside of the strike zone). He was well known for putting the ball into play, and particularly on the first pitch. He had exceptional hands at the plate, and would bat without batting gloves. Guerrero was able to hit for both power and average. In the outfield, Guerrero was sometimes considered a defensive liability, prone to making errors, which resulted in him being a designated hitter in the last stage of his remarkable career, but he was also known to have a very powerful throwing arm that allowed him to make outfield assists on base runners.

Many baseball fans and critics believe Guerrero's career was overshadowed by those of other players due to playing for a small fan base in Montreal, and similarly, many believe that he deserved to win the 2000 National League Most Valuable Player (MVP) Award for his remarkable season, an award which instead was won by Barry Bonds.

Guerrero barely missed being elected to the Baseball Hall of Fame on the first ballot (first year of candidacy), but he was admitted in on the second ballot.

One of Guerrero's sons, Vladimir Guerrero Jr., plays in MLB.

All content from Kiddle encyclopedia articles (including the article images and facts) can be freely used under Attribution-ShareAlike license, unless stated otherwise. Cite this article:
Vladimir Guerrero Facts for Kids. Kiddle Encyclopedia.