Hydrangea, common name Hortensia, is a genus of 70-80 species of flowers. The earliest kinds of hydrangea came from southern and eastern Asia.

The colour of the flowers can tell you how much acid is in the soil the plant is growing in. 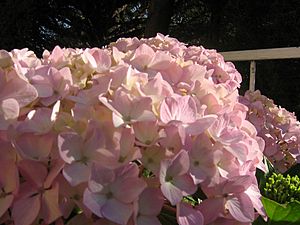 Hydrangeas are popular ornamental plants, grown for their large flowerheads, with Hydrangea macrophylla being by far the most widely grown with over 600 named cultivars, many selected to have only large sterile flowers in the flowerheads. Hydrangea macrophylla, also known as Bigleaf Hydrangea, can be broken up into two main categories; Mophead Hydrangea & Lacecap Hydrangea. Some are best pruned on an annual basis when the new leaf buds begin to appear. If not pruned regularly, the bush will become very 'leggy', growing upwards until the weight of the stems is greater than their strength, at which point the stems will sag down to the ground and possibly break. Other species only flower on 'old wood'. Thus new wood resulting from pruning will not produce flowers until the following season.

Hydrangea root and rhizome are indicated for treatment of conditions of the urinary tract in the PDR for Herbal Medicine and may have diuretic properties. Hydrangeas are moderately toxic if eaten, with all parts of the plant containing cyanogenic glycosides. Hydrangea paniculata is reportedly sometimes smoked as an intoxicant, despite the danger of illness and/or death due to the cyanide.

In Japan, ama-cha,甘茶 meaning sweet tea, is another herbal tea made from Hydrangea serrata, whose leaves contain a substance that develops a sweet taste (phyllodulcin). For the fullest taste, fresh leaves are crumpled, steamed, and dried, yielding dark brown tea leaves. Ama-cha is mainly used for kan-butsu-e (the Buddha bathing ceremony) on April 8 every year—the day thought to be Buddha's birthday in Japan. During the ceremony, Ama-cha is poured over a statue of Buddha and served to people in attendance. A legend has it that on the day Buddha was born, nine dragons poured Amrita over him; ama-cha is substituted for Amrita in Japan.

The pink hydrangea has risen in popularity all over the world, but especially in Asia. Pink hydrangeas have many different meanings, but generally mean, "You are the beat of my heart," as described by the celebrated Asian florist Tan Jun Yong, where he was quoted saying, "The light delicate blush of the petals reminds me of a beating heart, while the size could only match the heart of the sender!"

A popular pink hydrangea called Vanilla Strawberry has been named "Top Plant" by the American Nursery and Landscape Association.

All content from Kiddle encyclopedia articles (including the article images and facts) can be freely used under Attribution-ShareAlike license, unless stated otherwise. Cite this article:
Hydrangea Facts for Kids. Kiddle Encyclopedia.