Americana at Brand facts for kids

The Americana at Brand is a large shopping, dining, entertainment and residential complex in Glendale, California. The property was built and is owned and operated by Los Angeles businessman Rick J. Caruso and his company Caruso Affiliated. Caruso Affiliated has built and operates many other projects, including The Grove at Farmers Market in Los Angeles. The Americana at Brand's 82 retail shops include Barneys New York, Nordstrom, XXI Forever, and David Yurman; its restaurants include Din Tai Fung, Bourbon Steak by Michael Mina, and Katsuya; the complex comprises 100 condominiums and 242 luxury apartments.

The Americana project stirred debate in Glendale for four years. Some merchants feared the Grove-style "lifestyle center" would diminish business at the stores along Brand Boulevard and in the Glendale Galleria. Some residents worried about overdevelopment and traffic congestion.

Both The Americana at Brand and The Grove are organized upon the idea of a city center—with a mix of architectural styles, building heights and materials used, as well as vast open spaces at each project's center. Caruso Affiliated often casts its developments in a particular milieu. The architectural style of the Americana reflects the brick factory facades of the industrial era, with its massive elevator shaft with exposed steel beams, while The Grove is reminiscent of 1930s Los Angeles, California. Each of the two intends to appear to be a public space, but is private property and is protected as such. However, the two-acre park in the center of the complex is entirely public property. The private security force that patrols the property prevents anyone from taking photographs with professional equipment without permission. The Americana at Brand allows dogs on the property — except on its grassy area. The only breed restricted is the pit bull. Each store decides whether it allows pets. 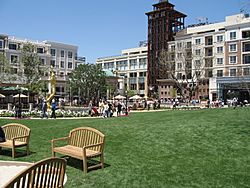 The Americana at Brand in Glendale

The Americana at Brand shares some of its retail and dining options with sister center The Grove at Farmers Market, such as a three-level flagship Barnes & Noble as well as Barneys New York, J.Crew, Apple, Kiehl's, The Cheesecake Factory, Topshop Topman, and Anthropologie, and is anchored by a three-level Nordstrom. It also features a XXI Forever, a two-level H&M, Urban Outfitters, Calvin Klein, an 18-theater Pacific Theaters cinema, American Eagle Outfitters, and higher-end stores like, Tiffany and Co., David Yurman, and Marciano. Some of the restaurants at The Americana at Brand are local concepts, such as Frida Mexican Cuisine, Chi Dynasty, and Trattoria Amici, as well as internationally recognized restaurants including Din Tai Fung, and Bourbon Steak by Michael Mina.

Food and beverage stores at the Americana range from specialty food pop-ups to high-end restaurants. These include tenants such as the Capital One Cafe (one of four in Los Angeles County), The Cheesecake Factory, Häagen-Dazs, Pinkberry, Jamba Juice, The Coffee Bean & Tea Leaf, Wetzel's Pretzels, Sprinkles Cupcakes, Eggslut, Shake Shack, Din Tai Fung, and Bourbon Steak by Michael Mina.

In addition to The Americana at Brand's upscale shops, restaurants and movie theater, the outdoor mall features Waters of Americana, an animated fountain by WET. The musical fountain, located in the central landscaped park, performs every hour on the hour, though a non-musical program runs between shows. A gold-leaf statue, chosen by developer Rick Caruso, rises from the center of the fountain's smaller pool. The statue is a replica of Donald De Lue's 1949 Spirit of American Youth sculpture in France, a memorial to Americans who fought at Normandy in World War II. The statue also serves as the icon for The Americana at Brand.

An internal transit system uses a battery-powered trolley car (built by the Gomaco Trolley Company) to shuttle visitors through the main square and around the perimeter of the complex. The line was in operation from the opening of the Americana at Brand complex, in May 2008. George F. McGinnis, a retired Disney Imagineer, designed the trolley cars. 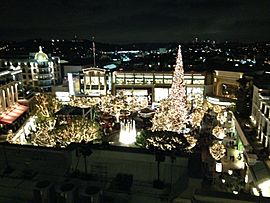 During the holiday shopping season, fake snow is produced periodically every evening. In mid-November, a Christmas tree is displayed, and lit every evening, beginning with their annual Tree Lighting Ceremony. The tree remains lit every evening for the remainder of the holiday season. The tree is up to 100 feet or more, and it is usually one of the tallest trees in Los Angeles County.

All content from Kiddle encyclopedia articles (including the article images and facts) can be freely used under Attribution-ShareAlike license, unless stated otherwise. Cite this article:
Americana at Brand Facts for Kids. Kiddle Encyclopedia.