La Crescenta-Montrose is a populated place in Los Angeles County, California. Part of the community is an unincorporated area and census-designated place (CDP), while the other portion lies within the City of Glendale. According to the United States Census Bureau, the La Crescenta-Montrose CDP measures about 3.4 square miles (8.8 km2), and the population was 19,653 at the 2010 census, up from 18,532 in the 2000 census.

La Crescenta-Montrose is bordered on the north by the San Gabriel Mountains and Angeles National Forest, on the east by La Cañada Flintridge, on the south by the Verdugo Mountains and central Glendale, and the northwest by the Sunland-Tujunga community of Los Angeles. The Foothill Freeway (I-210) runs through the southern portion of the area.

According to the 2010 United States Census, La Crescenta-Montrose had a median household income of $89,375, with 7.4% of the population living below the federal poverty line.

There were 6,945 households out of which 37.7% had children under the age of 18 living with them, 57.4% were married couples living together, 10.0% had a female householder with no husband present, and 28.8% were non-families. 24.5% of all households were made up of individuals and 7.9% had someone living alone who was 65 years of age or older. The average household size was 2.66 and the average family size was 3.22.

In 2009, the Los Angeles Times's "Mapping L.A." project supplied these neighborhood statistics based on the 2000 census.

Comparison of La Crescenta-Montrose with nearby neighborhoods
Most percentages are rounded to the nearest whole figure.

The area was originally part of the homelands of the Tongva people. It became part of Rancho La Cañada, a Mexican land grant given in 1843 by Governor Manuel Micheltorena to a Mexican schoolteacher from Pueblo de Los Ángeles, Ygnacio Coronel (1795–1862).

In November 1933, wildfires raged through the nearby San Gabriel mountains above the communities of La Crescenta, La Cañada and Montrose. During the last week of December of that year, a series of winter storms pounded the mountainside with 12 inches of rain. On New Year's Eve, more heavy rains led to sporadic flooding.

Around midnight, hillsides in at least three mountain locations collapsed sending millions of tons of mud and debris into the Crescenta Valley neighborhoods below.

More than 400 homes were destroyed in La Cañada, La Crescenta, Montrose and Tujunga. Scores of people were killed, and hundreds were left homeless. Entire families were wiped out. The mudslides that began in the mountains above La Cañada and La Crescenta carved a path of destruction all the way to the Verdugo Wash and beyond.

Some Montrose residents sought shelter from flooding at American Legion Post 288, which was destroyed, killing 12. 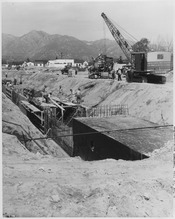 Parts of Foothill Boulevard were buried under 12 feet (4 m) of mud, boulders and debris. The mud was deep enough to bury cars completely on Montrose Avenue. Miles of Honolulu Boulevard were inundated by several feet of sand and silt.

Two notable victims of the flood were silent-era identical-twin child actors Winston and Weston Doty, who died at the age of 19.

Following the disaster, the U.S. Army Corps of Engineers and the County of Los Angeles built a flood control system of catch basins and concrete storm drains, designed to prevent a repeat of the 1934 disaster.

The flood was commemorated in Woody Guthrie's song "Los Angeles New Year's Flood". To honor the victims of that New Year's calamity and to mark its 75th anniversary a small monument was dedicated January 1, 2004, at Rosemont and Fairway Avenues, in Montrose, near where the American Legion Hall had stood.

In the spring of 2012, a large black bear managed to wander regularly from the Angeles National Forest into the La Crescenta-Montrose-Glendale residential area, rummaging through trash cans and showing a preference for Costco meatballs and tuna. The bear was subdued in La Crescenta and returned to the forest. A Twitter account from an individual posting as "GlenBearian" appeared with updates from the bear's perspective.

The historic 1946 La Crescenta Motel, formerly known as the May Lane Motel, with its classic postwar L-shaped layout on Foothill Blvd., has been used as a location for numerous feature films and television shows, such as Glee, Criminal Minds, Mad Men and True Blood.

Rockhaven Sanitarium on Honolulu Avenue, built entirely of rock, opened in 1923. It became known as the "Screen Actors' Sanitarium," housing such patients as Billie Burke and Gladys Baker, mother of Marilyn Monroe.

Another, more notorious sanitarium existed in La Crescenta from the 1920s to the early 1960s. A few yards west of the La Crescenta Motel, on the corner of Foothill Boulevard and Rosemont Avenue, is the site of the Kimball Sanitarium, which was housed in a large, foreboding, converted Victorian mansion built in the 1880s. The site became sprawling shopping plaza, and a Ralphs supermarket currently occupies the spot where the disreputable sanitarium once stood.

St. Luke's of the Mountains Episcopal Church was designed and built by the famous artist Seymour Thomas in 1924. Constructed of natural stone from the valley, it is reminiscent of a woodlands church in northern Europe. It is considered to be the architectural centerpiece of the valley. St. Luke's is located at 2563 Foothill Blvd.

Le Mesnager Barn is a stone barn perched high above the valley, built in 1911 by George Le Mesnager, a French patriot, to store and process grapes from his vineyards in the Sparr Heights area. These grapes supplied his "Old Hermatage Vinyards" winery in downtown Los Angeles. There is still a Mesnager Street in the downtown area where the winery had been located. It is owned by the City of Glendale, which plans to restore it as an educational nature/history center. Le Mesnager Barn is located in Deukmejian Wilderness Park at the top of Dunsmore Ave.

La Crescenta is home to one of two American ashrams founded by Indian mystic and poet Swami Paramananda. The Ananda Ashrama is located at the top of Pennsylvania Avenue near Deukmejian Wilderness Park.

La Crescenta Elementary School was built in 1887 at the corner of Foothill and Dyer, but soon moved to a new location at La Crescenta and Prospect. A wooden schoolhouse was built on this site in 1890. A larger school building replaced it in 1914, and the present structure was erected in 1948.

The Old School Bell: La Crescenta's school bell first rang students to school from across the valley in 1890. It was placed in storage from 1948 until 1976, when it was re-hung and dedicated with a plaque listing the names of the kids in the first class at La Crescenta Elementary. The bell is now rung once a year in June by the graduating students. The Bell is located in front of La Crescenta Elementary School.

La Crescenta Presbyterian Church is a striking church building constructed in 1923. This is one of the oldest congregations in the valley, first meeting in the 1880s. In the congregation's early years they shared facilities with the elementary school, as did the Episcopals that later built St. Luke's. La Crescenta Presbyterian Church is located at 2902 Montrose Avenue.

Some of the streets in the Montrose neighborhoods are designed in a rose pattern with the streets laid out in a circular pattern, thus the name Montrose.

All content from Kiddle encyclopedia articles (including the article images and facts) can be freely used under Attribution-ShareAlike license, unless stated otherwise. Cite this article:
La Crescenta-Montrose, California Facts for Kids. Kiddle Encyclopedia.