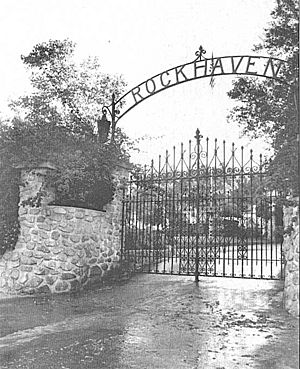 The Rockhaven Sanitarium Historic District is located in the Crescenta Valley at 2713 Honolulu Avenue in what is now the City of Glendale, California. The sanitarium for which it is named was opened in 1923 by psychiatric nurse Agnes Richards as a private mental health institution for women with mild mental and nervous disorders. The property was added to the National Register of Historic Places in June 2016.

Rockhaven was inspired by principles of the Cottage Plan of Asylum architecture for mental institutions, first developed in the late nineteenth century. The Cottage Plan placed numerous individual buildings within landscaped gardens in order to create a serene, home-like environment for residents. Rockhaven is one of the best examples of an early twentieth-century woman-owned, women-serving private sanitarium in California, and was one of the first of its type in the nation. It reflects the vision of founder Agnes Richards, R.N., and represents a small, yet significant movement that sought to improve the conditions of mentally ill women in the early twentieth century.

Agnes Traviss Richards, a registered nurse, was inspired to found her own institution when she became discouraged by the way women with mental illness were treated by large, state-run facilities. Having worked in state-run insane asylums in Nebraska, Iowa and Patton State Hospital in San Bernardino, California, she witnessed the atrocities firsthand. Richards’ vision was to create a peaceful, home-like setting where women could be cared for surrounded by gardens and lush landscaping.

Rockhaven Sanitarium Historic District occupies a 3.4-acre site with several vintage hospital wards and guest cottages. There are a total of fifteen buildings on the property that were erected between 1920 and 1972. Agnes Richards had some buildings relocated to the Rockhaven Sanitarium and others lifted and turned on their foundation to invite sunlight into the rooms. Richards acquired the five Craftsman-style buildings over time and she hired Prescott and Brothers to design the Spanish Colonial Revival architecture style structures which were popular in Southern California in the 1920s and 1930s. Patios and courtyards acted as extensions of the residents’ indoor living quarters inviting privacy and serenity.

Agnes Richards ran Rockhaven Sanitarium until 1967 when she passed it on to her granddaughter Patricia Traviss. In Traviss' time, Rockhaven changed with the needs of its residents and became popular for the care of elderly women with dementia. In 2001 Traviss sold Rockhaven to a large hospital corporation which operated it as Ararat Home of Los Angeles. However, by 2006 they found the upkeep too costly and sold it to developers who planned to scrap the lot and build condos. The community stepped in to stop the demolition and in 2008 the City of Glendale purchased Rockhaven for about $8.25 million with the intent to open the property to the public for use as a community park.

In February 2016, the site was being considered by the City of Glendale for "adaptive reuse." and later that year, for a mental health facility or a shopping center.". However, in 2019 Glendale cut ties with Gangi Development after two years and the site's future remains unknown.

The California State Historical Resources Commission gave unanimous approval to list the Rockhaven Sanitarium to the California Register of Historical Resources on April 18, 2016. Despite objection by the City of Glendale, the Friends of Rockhaven successfully nominated the Rockhaven Sanitarium for listing in the National Register of Historic Places and it was so designated in June 2016. It is recognized, in part, for being one of only three women's hospitals remaining from its time.

The Friends of Rockhaven is a 501(c)(3) charity organized to protect the buildings and legacy of Rockhaven Sanitarium with the goal of establishing a park and community center.

All content from Kiddle encyclopedia articles (including the article images and facts) can be freely used under Attribution-ShareAlike license, unless stated otherwise. Cite this article:
Rockhaven Sanitarium Historic District Facts for Kids. Kiddle Encyclopedia.