IHOP, officially known as the International House of Pancakes, is an American multinational pancake house/diner-style table service restaurant chain that specializes in breakfast foods. It is owned by DineEquity, with 99% of the restaurants run by independent franchisees. While IHOP's focus is on breakfast foods, it also offers a menu of lunch and dinner items. The company has 1,650 locations in North America, Latin America, the Middle East, Southeast Asia, and Oceania. It is known for many of its locations being open 24 hours a day, 7 days a week. For locations that are not open 24 hours, the franchise's minimum operating hours are Sunday through Thursday from 7 a.m. to 10 p.m., and Fridays and Saturdays from 7 a.m. to 12 midnight. 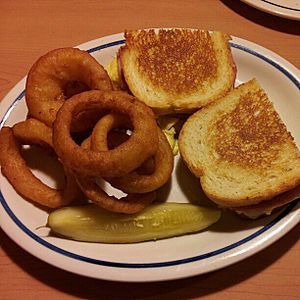 Ham and Egg Melt at IHOP

Jerry Lapin, Al Lapin, and Albert Kallis founded International House of Pancakes in 1958 with the help of Sherwood Rosenberg and William Kaye. The first restaurant opened on July 7, 1958, at 4301 Riverside Drive in Burbank, California.

The location is coincidentally across from the oldest remaining Bob's Big Boy restaurant. Albert Kallis was a professional artist who designed the film posters of American International Pictures in the 1950s. Director Bert I. Gordon recalled that Kallis designed their logo and left poster artwork.

The menu later expanded (especially in the 1980s) to include (along with breakfast foods) standard lunch and dinner items found in similar restaurant chains such as Denny's. From 1959 to 1975, it was the flagship division of International Industries, a holding company which also owned the Orange Julius refreshment stands.

In 1973, the chain's name was shortened to "IHOP" for marketing purposes, using a cartoon kangaroo in its commercials at the time, and since then the full name and acronym have been officially interchangeable. From 1976 onward, the company increasingly favored the acronym.

Franchising agreements with M.H. Alshaya, an international restaurant-franchising firm, resulted in an agreement for Alshaya to open as many as forty IHOP locations in the Middle East, beginning in 2012. By the end of 2013, IHOP restaurants operated in four Middle Eastern countries: Kuwait, Saudi Arabia, the United Arab Emirates, and Lebanon.

All content from Kiddle encyclopedia articles (including the article images and facts) can be freely used under Attribution-ShareAlike license, unless stated otherwise. Cite this article:
IHOP Facts for Kids. Kiddle Encyclopedia.