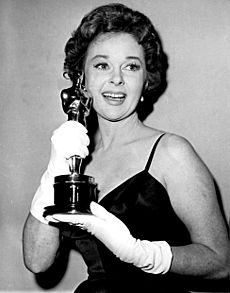 Susan Hayward (30 June 1917 — 14 March 1975) was an American actress. Her original name was Edythe Marrenner. She began her career as a fashion model in New York City. She began acting in Hollywood in 1937. She played Janice Blair in And Now Tomorrow. For her role as Lillian Roth in the movie I'll Cry Tomorrow, she received a Best Actress Award at the Cannes Film Festival.

All content from Kiddle encyclopedia articles (including the article images and facts) can be freely used under Attribution-ShareAlike license, unless stated otherwise. Cite this article:
Susan Hayward Facts for Kids. Kiddle Encyclopedia.