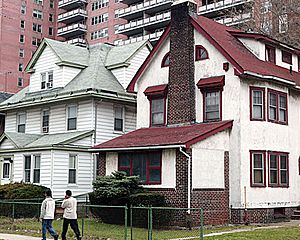 Kensington is a predominantly residential area that consists of housing types that run the gamut from brick rowhouses to detached one-family Victorians to apartment buildings. Pre-war brick apartment buildings dominate the Ocean Parkway and Coney Island Avenue frontage, including many that operate as co-ops. The main commercial streets are Coney Island Avenue, Church Avenue, Ditmas Avenue and McDonald Avenue. Ocean Parkway bisects the neighborhood east-west. Kensington is served by the NYPD's 66th Precinct. 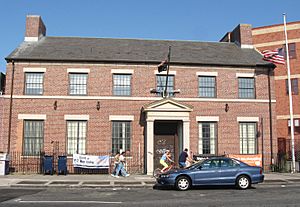 The land where Kensington now sits was first colonized by Dutch farmers during the seventeenth century within the Town of Flatbush. It was re-settled by British colonists in 1737. Developed in 1885 after the completion of Ocean Parkway, the neighborhood was named after the place and borough in West London, at the turn of the century.

Ocean Parkway, which starts in Kensington, was finished in 1880; it features about five miles (8 km) of landscaped malls, benches, chess tables and walking and bike paths, linking Prospect Park to Coney Island, and is now part of the Brooklyn-Queens Greenway. Homebuilding began in earnest in the 1920s and attracted Italian and Irish immigrants to the neighborhood. Brick and brownstone townhouses coexist with single- and two-family homes with yards and garages. Five- and six-story pre- and post-war apartment buildings and co-ops are also common. 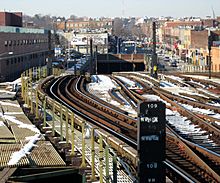 The Culver Ramp takes the IND Culver Line from a tunnel to an elevated structure.

The New York City Subway's IND Culver Line (F <F>, and ​G trains) runs along the western part of the neighborhood and stops underground at Fort Hamilton Parkway and at Church Avenue. The line rises above ground to an elevated structure (F <F>​ trains) to serve the Ditmas Avenue and 18th Avenue stations. In addition, Kensington is served by the B8, B16, B35, B67, B68, B69, B70, B103 local buses, as well as the BM1, BM2, BM3, BM4 express buses to Manhattan. 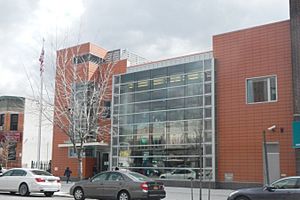 Founded as a deposit station in 1908 by the Mothers' Kindergarten Club of P.S. 134 (18th Avenue and East 5th Street) and the Kensington Improvement League, Kensington's branch library quickly outgrew two locations before becoming a full-fledged branch at 770 McDonald Avenue (near Ditmas Avenue) in 1912. When it again needed more space in 1960, it moved to 410 Ditmas Ave., between East 4th & East 5th Streets, a former catering hall known as Ditmas Gardens, Savoy Garden, and The Manor, that was leased and renovated, arousing national media interest. The branch moved again in 2012, opening on November 15 at its new facilities at 4207 18th Avenue.

All content from Kiddle encyclopedia articles (including the article images and facts) can be freely used under Attribution-ShareAlike license, unless stated otherwise. Cite this article:
Kensington, Brooklyn Facts for Kids. Kiddle Encyclopedia.