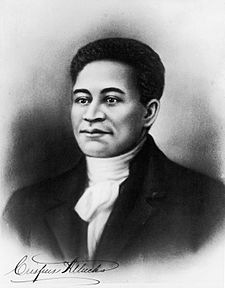 This was in contrast to Black Loyalists, African Americans who left rebel planters and joined British forces. Many families escaped to take up the British offer of freedom for service, making their way to British lines and territory for safety.

Crispus Attucks is considered to be the first Black Patriot because he was killed in the Boston Massacre. Attucks was commemorated by his fellow Bostonians as a martyr for freedom. Of mixed Native American and African ancestry, he was a fugitive slave who had escaped in 1750 from a farm in Framingham, Massachusetts. His death in the Boston Massacre is considered to be the first Patriot fatality of the war. 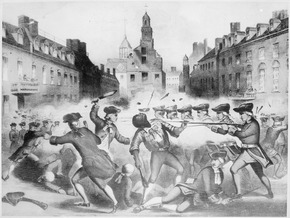 A 19th-century lithograph variation of Paul Revere's famous engraving of the Boston Massacre. Produced before the American Civil War, this image emphasized Crispus Attucks in the center. He became an important symbol to abolitionists of sacrifice and black freedom. (By John Bufford after William L. Champey, circa 1856)

Enlarged, 1781 drawing, of Black Patriot soldier in the 1st Rhode Island Regiment of the Continental Army 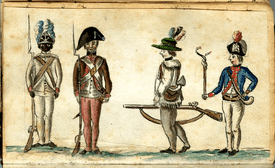 1781 drawing, of American soldiers from the Yorktown campaign, showing a black infantryman, on the far left, from the 1st Rhode Island Regiment. This regiment had the largest number of black Patriot soldiers in the Continental Army

Black Patriots who served in the State Militias

The Bucks of America were an all-Black, Massachusetts Militia company organized in 1775 in Boston. This was the name given to one of two all-black units fighting for independence. There is little known of the campaign history of the Bucks company, or if they ever saw combat. It appears that they operated mainly around Boston. The Bucks of America may have acted primarily as an auxiliary police or security service, in the city, during the war. They most likely did not see action against regular British soldiers.

Black Patriots who served in the Continental Army

After the British started recruiting African Americans to start serving or assisting the British cause on the promise of freedom, Americans began to recruit free blacks in New England and the East Coast to serve in the army. They were promised a life of luxury and mobility if they joined the war. The northerners were trying to escape the harsh treatment of blacks during the slavery era. By joining the war, they believed they were bettering the lives of African Americans all over.

Most of the time, Black Patriot soldiers served as individuals in a variety of predominantly white units of the Continental Army.

William "Billy" Lee was an enslaved valet of George Washington who served in the Continental Army and fought with the general's forces. Lee was considered to be Washington's favorite slave, and was often featured in the background of the general's portraits. 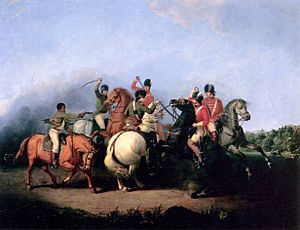 This depiction of the 1781 Battle of Cowpens showed an unnamed Patriot black soldier, possibly a slave, on the far left firing his pistol, saving the life of Colonel William Washington, mounted on a white horse in the center; from an 1845 painting by William Ranney

The National Liberty Monument is a proposed national memorial to be located in the capital to honor the more than 5000 enslaved and free persons of African descent who served as soldiers or sailors, or provided civilian assistance during the American Revolutionary War. The memorial is an outgrowth of a failed effort to erect a Black Revolutionary War Patriots Memorial. This was authorized in 1986, but fundraising faltered and the memorial foundation dissolved in 2005.

Congress authorized the National Liberty Monument in January 2013. On September 8, 2014, the United States House of Representatives passed the joint resolution approving the location in the capital of a memorial to commemorate the more than 5,000 slaves and free Black people who fought for independence in the American Revolution. The joint resolution would approve the location of a commemorative work to honor the more than 5000 slaves and free black persons who fought in the American Revolution.

Main page: The Colored Patriots of the American Revolution

All content from Kiddle encyclopedia articles (including the article images and facts) can be freely used under Attribution-ShareAlike license, unless stated otherwise. Cite this article:
Black Patriot Facts for Kids. Kiddle Encyclopedia.